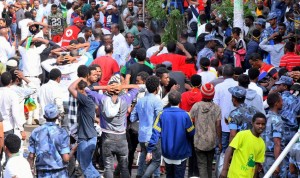 The election of Prime Minister Abiy Ahmed created hope for Ethiopia’s future. Even though it has been less than a year since his appointment, he has already instituted multiple changes and proposed  more in the near future.

Despite the hope engendered around the rise of Ahmed, his authority was questioned when ethnic violence rose in Western Ethiopia. Although ethnic violence has been consistently common and its mitigation central to Ahmed’s campaign, recent conflicts are becoming  much more violent than before. The most recent conflict occurred on the border of Oromia and Benishangul-Gumuz region, an area of contention for two of the nine ethnic divisions in Ethiopia. The violence reportedly began after officials from Gumuz were killed while visiting Oromia. The unrest was primarily instigated by youth gangsters wielding firearms and knives who set around 1,560 houses on fire and killed at least 44 Ethiopians. These attacks have displaced up to 90,000 Ethiopians, all who fled to save their life. In leaving their homes and belongings behind, most of these Ethiopians have had to rely on other agencies for support. The Director of National Disaster Risk Management, for example, has so far provided food and assistance to the displaced families residing in the Western zone of Oromia. The commision also reportedly called on the federal government to send troops before violence escalated but received no response.

On the other side of Oromia border, clashes continue between the Somalis and Oromos . These two areas are the largest regions in Ethiopia, sharing a border of about 1,400 km. Moyale which is adjacent to the Ethiopia-Kenya border, has witnessed some of the worst violence in the past three to four months. Moyale, although one region, is separated by the Oromia on the west and Somalis on the east. In July, tensions elevated when Oromo’s brought weapons into Somalia and razed villages to the ground. Adan Kulow, a humanitarian expert, notes that the instigation of this violence was little more than an effort to reclaim land. Many people died from the fire and many others fled. Those who have fled are reportedly still displaced, making Ethiopia a country with one of the highest rates of internally displaced peoples  in the world. One Somali victim of the attack, Mohammed Abid remembers the Oromos “laughing and taunting us in the Oromo language.” Abid claimed to see men being shot in the face in front of their wives and wonders where the prime minister was during all of this.

In response to these clashes, protests occurred on the streets of Ethiopia’s capital earlier this month. During this time, the Ethiopian government allegedly shut down the internet service for 40 hours. It was the second time the internet was shut down, both reportedly occasions of political unrest. Although Ethiopia does have a low Internet percent usage, the restriction of the internet primarily affected the journalists who needed to use it to communicate and publish their work. An Ethiopian blogger, Atnafu Berhane, reported that this shutdown aimed to control the spread of political developments within Ethiopia. However, Abiy’s has pushed against such restrictions.

As Abiya is promising change for the future, he should be doing more to address the violence instigated by the Oromos. It is clear that ethnic violence has reached an extreme with the introduction of armed groups. Instead of merely downplaying the violence and blaming unrest  on guerrilla groups, the government should address the needs of the people. Witnessing the rise of vigilantes, we’re left asking: where is Abiy Ahmed and why isn’t he keeping his promises?