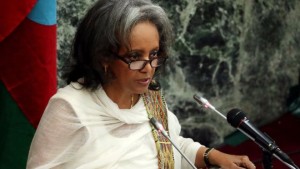 After the resignation of Mulato Teshome, the Ethiopian parliament unanimously elected its first female president, Sahle-Work Zewde on October 25, 2018. Although most of the executive power lies within the role of the prime minister, her election holds social significance. It represents Ethiopia’s path to redefining the role of women in its patriarchal society.

Zewde was born in the capital of Ethiopia, Addis Ababa and attended University of Montpellier in France. She started her diplomatic career by serving as an ambassador to Senegal, Dijbouti and France. She was also a permanent representative of the Intergovernmental Authority on Development (IGAD) and United Nations Educational Scientific and Cultural Organization (UNESCO).

Before being elected, Zewde was working for United Nations. She was appointed as the Head of the United Nations Office to the African Union (UNOAU) by the UN Secretary General in June 2018. Here, she was also the first women to be appointed this position. During her appointment she was credited for “strengthening partnerships between the United Nations and African Union” (quoted from the UN Secretary General). On October 19, just days before her appointment as president, she celebrated the 18 year anniversary of resolution 1325. This was a “women, peace and security agenda” formed by the African Union to establish efforts to allow female voices be heard.

It is clear that Zewde will bring her interest and experience with female empowerment to Ethiopia. Even in her acceptance speech she even said, “If you thought I spoke a lot about women already, know that I am just getting started.” Her statement reflects a historically patriarchal society where women are constrained to their domestic sphere. It has been previously noted about women’s inability to participate in athletics, because they were challenged by social and religious norms. For this reason, it is controversial that Ethiopia has recently elected fourth president of the nation as its first female president. In addition to Zewde’s election, about half of the prime minister’s cabinet is women. Sehin Teferra, co-founder of the Setaweet movement, mentions that this “critical mass” will change Ethiopia’s future. She recalls that “appointing one or two women would not have made the change”.

Zewde plans to use her new appointment to raise issues to female empowerment for the next 6 years. Sehin also states that despite having as much power as Ahmed, Zewde’s diplomatic power will allow her to ultimately change power given to Ethiopian women.