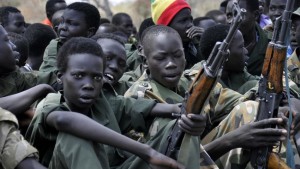 The children in the world’s youngest country are suffering. South Sudan has been embroiled in a civil war for almost 5 years now. The rivalry between the armed forces and opposition groups has led to the widespread displacement of about 2 million people and has forced around 2.5 million to move to neighboring countries. Recent reports estimate that the death toll is around 380,000. South Sudanese children have faced the worst of the war’s consequences— from malnourishment and lack of education, to abduction and forced military action. The physical and emotional pain that the children must bear leads many to question the potential for progress in the country.

Child Soldiers:
The armed South Sudanese forces and opposition groups are both guilty of abducting and forcing child soldiers into war. Both have been reported to take children, mostly teenage boys, from their parents and detain them in overcrowded rooms. The children are given no proper nourishment but are still forced to be trained as soldiers. In the midst of their training, they are forced to commit heinous crimes like gang rape, infanticide, and arson, an escaped soldier told Human Rights Watch.

The trauma that these child soldiers are forced to undergo at such a young age prevents them from having a childhood. For the soldiers who do escape and come back to society, very few find their real families and homes. Many depend on shelters to provide food and education. An escaped 17-year-old child soldier who was interviewed by the Human Rights Watch is now starting primary schools. He states, “If I learn, I will be independent and able to do things on my own. Maybe I can become a leader”.

Rape and Child Marriage:
It has been reported that the Sudanese army, Sudan People’s Liberation Army (SPLA), has committed about 80% of the document 987 child murders as of June 2018. The child soldiers of SPLA were also involved in 90% of the gang rapes of the reported 658 women. These statistics demonstrate that violence against women and children has been used as a weapon of war in order to prove the SPLA’s dominance over an entire society.

Additionally, child marriage continues to be a common occurrence in South Sudan in the midst of the war. Recently, men have begun to use social media to sell their brides. In a recent Facebook post, a picture of a 17-year-old girl was shared with her father claiming that she would be sold to the man with the highest dowry. The winner was a wealthy businessman who gave the child’s father “over 500 cows, three luxury cars and $10,000 dowry.” The child was reported as the “most expensive woman in South Sudan.” Facebook eventually had the post removed but not until it was too late. This was one of the first recorded instances of online auctions and points to a dangerous future.

Education and Disease:
In the midst of these issues, all children suffer from malnutrition and disease. Since the beginning of violence, children faced the highest rate of food insecurity, which is expected to deteriorate furthermore. The lack of food inhibits the growth of these young children and affects their development. Additionally, many children are out of school, making them more vulnerable to violence and capture. The stunted growth and lack of education they receive questions the possibility for success of South Sudan’s future. If the children are unable to eat or attend school, what will South Sudan’s future look like?

The combination of issues that the youth suffer in South Sudan makes them one of the most suffered groups of people in the civil war. Especially when considered collectively, these issues render the children of South Sudan one of the world’s most vulnerable populations. These children do not get to experience a childhood and likely will not be able to prepare for the future of South Sudan.