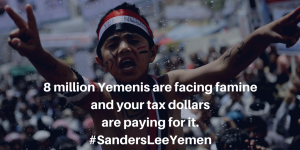 WASHINGTON, D.C., March 1, 2018 – Yesterday, Senators Bernie Sanders (I-VT), Mike Lee (R-UT), and Chris Murphy (D-CT) introduced the bipartisan resolution S.J.Res. 54 to end American support for the Saudi-led coalition in Yemen. This bill seeks to end U.S. military involvement in the coalition’s war in Yemen, invoking the 1973 War Powers Resolution. The War Powers Resolution, which was passed in the wake of the Vietnam War, guarantees a Senate debate and vote on this unauthorized war in Yemen.

Since March 2015, the U.S. has supported a military coalition led by Saudi Arabia and the United Arab Emirates (UAE) in the Yemen civil war. This war, which pits an armed Yemeni rebel group called the Houthis against the Yemeni government, has resulted in the largest humanitarian crisis in the world since World War II. With over 10,000 Yemeni civilians dead, 40,000 more injured, and over eight million facing the threat of famine, the conflict has had devastating consequences for the region.

The United Nations has pinpointed U.S.-supported airstrikes carried out by the Saudi-led coalition as the leading cause of civilian casualties. Many of these airstrikes have targeted schools, hospitals, and other forms of vital infrastructure – all probable war crimes. U.S. support has enabled such crimes, yet Congress never authorized these measures.

This legislation represents a bipartisan push aimed at saving lives and preventing suffering on an unimaginably large scale. S.Con.Res.54 is our best chance to end America’s role in an unconstitutional war and push for peace for the people of Yemen. U.S. taxpayer dollars should not be funding Saudi and UAE war crimes in Yemen.