Since March 2015, the U.S. has supported a military coalition led by Saudi Arabia and the United Arab Emirates (UAE) in a civil war in Yemen. The war has resulted in massive civilian casualties, and the largest humanitarian crisis in the world. It has killed more than 10,000 Yemenis and wounded more than 40,000, the majority of whom are civilians. The United Nations has stated that U.S.-supported airstrikes carried out by the Saudi-led coalition are the leading cause of civilian casualties. Meanwhile, Amnesty International and Human Rights Watch have documented coalition airstrikes that have repeatedly targeted schools, hospitals, public markets, and other vital civilian infrastructure – all probable war crimes carried out with U.S. support.

The coalition’s actions have created the world’s largest humanitarian crisis, using starvation as a weapon of war by blockading and interfering with the delivery of vital humanitarian and commercial assistance, which the majority of Yemeni civilians depend on for survival. Due to the war, more than 8 million people are on the brink of starvation and Yemen is home to the largest and fastest growing cholera crisis ever documented. Every 10 minutes, a Yemeni child under 5 dies from starvation or disease.

The Saudi-led coalition, backed by several Middle Eastern and African countries, and supported militarily by the U.S., U.K., Canada, and France, among others, is using American weapons to slaughter civilians and block humanitarian aid from reaching hundreds of thousands of civilians in need. U.S. involvement in the war is only getting worse: in April, President Trump signed a $110 billion arms deal with Saudi Arabia. It’s time to end America’s role in this suffering.

The United States’ Role in Yemen

Congress has never authorized America’s involvement in this war in Yemen, yet for almost three years the U.S. has fueled the conflict and its war crimes. Since the beginning of the intervention in March 2015, the U.S. has provided mid-air refueling to coalition jets, shared intelligence for targeting assistance, and sold U.S. bombs to the coalition. Throughout the war, Saudi Arabia and its allies have targeted civilian areas, hospitals, schools, and farms with U.S.-made bombs dropped by planes refueled by the U.S. Meanwhile, the U.S. has provided political cover for Saudi Arabia and its allies while they deliberately use starvation and disease as weapons of war, putting 8 million Yemenis a step away from famine. None of this brutality would be possible without continued American support.

What does this bill do?

America’s unconstitutional war in Yemen has never been authorized by Congress. That’s why Senators Bernie Sanders (I-VT) and Mike Lee (R-UT) have introduced S.J.Res. 54, which would end U.S. military involvement in the Saudi-led coalition’s war in Yemen. The resolution would end U.S. refueling of and intelligence-sharing to coalition warplanes conducting aerial bombings in Yemen. S.J.Res. 54 invokes the War Powers Resolution of 1973 that was passed in the wake of Vietnam to empower Congress as the sole body that can declare war. Under the War Powers Resolution, this important legislation is guaranteed a vote, which means that the Senate will finally debate and vote on this completely unauthorized war. This legislation is our best chance to end America’s role in this unconstitutional war and push for an end to the suffering of the Yemeni people.

Senators Bernie Sanders (I-VT) and Mike Lee (R-UT) have introduced a bipartisan resolution, S.J.Res. 54, to end American support for the Saudi-led coalition in Yemen. This bill seeks to end U.S. military involvement in the coalition’s war in Yemen, invoking the 1973 War Powers Resolution. The War Powers Resolution, which was passed in the wake of the Vietnam War, guarantees a Senate debate and vote on this unauthorized war in Yemen. 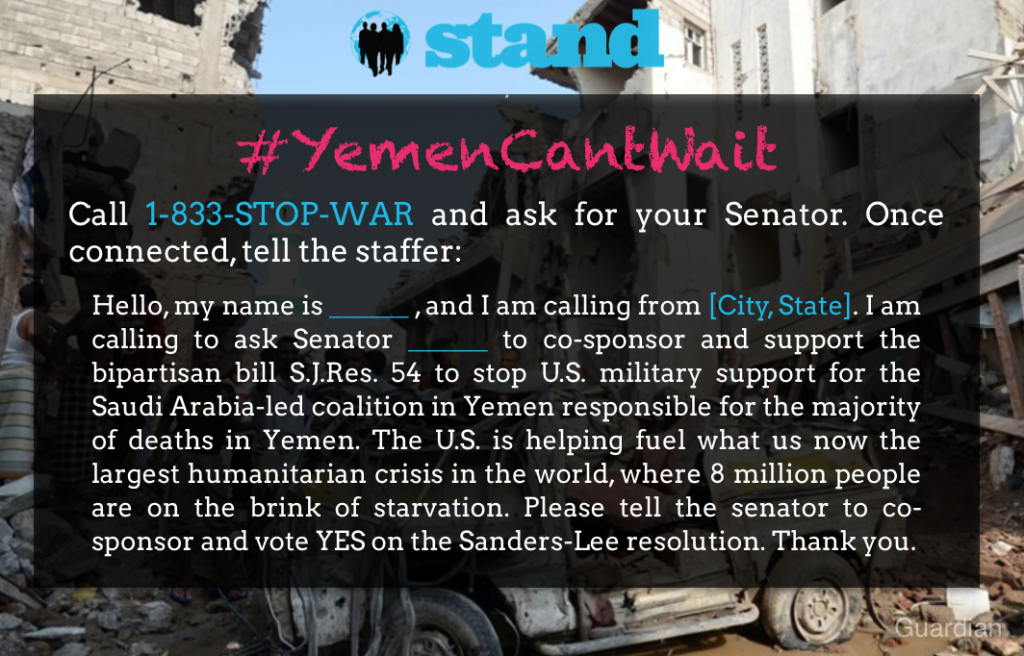 Call 1-833-STOP-WAR and connect to your Senators offices. Tell them:

Hello, my name is ____, and I am calling from [city, state]. I am calling to ask Senator ____ to co-sponsor and support the bipartisan bill S.J.Res. 54 to stop U.S. military support for the Saudi-led coalition in Yemen. Today, U.S. is helping fuel what is now the largest humanitarian crisis in the world, where 8 million people are on the brink of starvation due to the war. Please tell the senator to co-sponsor and vote YES on the Sanders-Lee resolution. Thank you. 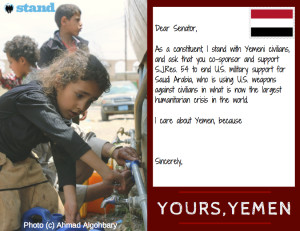 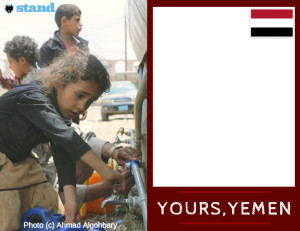 Write a note to your Senator(s) letting them know why you support this bill. Use this template (with text // without text) and write a brief message explaining why you care about the crisis in Yemen and the Sanders-Lee bill! Then, tweet this image at your senators’ Twitter accounts using the #YoursYemen hashtag.