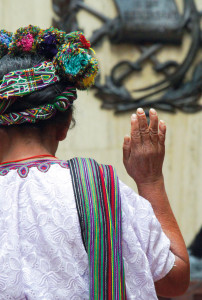 Located in Central America, Guatemala has always been an important center of Mayan culture and civilization. Guatemala is a region with which many Mayans have a strong connection, and, in fact, make up over 51 percent of the population. Despite their deep historical connection with the area, however, Mayans have traditionally faced discrimination in Guatemala. Mayans refer to the “Silent Holocaust” of 1981-1983 as their third holocaust, following the Spanish conquest and its aftermath, and the Liberal revolution of the 19th century, which led to mass land desolation from indigenous peoples.

When Miguel Ydigoras Fuentes was elected president of Guatemala in 1958, he led a degrading and racist campaign against Mayans (who he called “mountain dwellers”), encouraging members of the military to torture, rape, and kill Mayans. Due to discrimination against Mayan women, a group of both Guatemalan and Mayan men planned a coup to eliminate Fuentes from office. The coup ultimately failed, but catalyzed the Guatemalan Civil War that took place from 1960 to 1996. During this civil war, many Mayans rebelled and were named “internal enemies” by the government. Various social movements in the 1960s reflected a national demand for “land and fair wages in the Mayan highlands and large farms of the south coast.” When the Spanish embassy, holding 39 Mayan leaders, was burned to the ground, armed insurgencies sprouted up under the name “Guatemala National Revolutionary Unit.” They established four main guerrilla groups that attacked national security forces and sabotaged economic activities. The government used these actions to justify their call for their extermination. Approximately 200,000 Mayans were killed during the war.

Though prior to this period there had been periodic killings, the “Silent Holocaust” of 1981-1983 resulted in the most deaths. In 1982, General Efraín Ríos Montt became head of state and led a  scorched earth campaign  against the Mayan people. In the 17 months of his military rule, soldiers hunted down leftist guerrillas in Mayan highlands and systematically killed Mayans – civilians and combatants alike. Racist propaganda was spread, portraying Mayans as primitive and blaming them for the scarcity of agricultural products in the country. Some of the people that carried out these attacks proudly called themselves “killing machines.” Most Mayans killed were not part of guerilla movements, but were teachers, farmers, university and high school students, and other civilians. Women were raped, tortured, and killed, and even children and the elderly were targeted by the government.

According to The Center for Justice and Accountability, “between 500,000 and 1.5 million Mayan civilians fled to other regions within the country or became refugees abroad from 1981-1983 alone.” In 1983, Ríos Montt was deposed in a coup, and in 1986, a government formed by the Guatemalan people created a new constitution. Although the constitution included articles acknowledging the existence of Mayans and their traditions, and another article established law for regulations of indigenous peoples – the laws were not enacted nearly 10 years after the fact. In June 1994, the government signed a Commision for Historical Clarification with the UN and agreed to investigate the genocide.

After the results of the commission’s investigation were released, Ríos Montt was arrested and convicted of genocide and crimes against humanity. However, two weeks after his conviction, Guatemala’s Constitutional Court annulled the conviction. Although he was supposed to face trial again in 2015, he was declared mentally unfit and the trial was suspended until 2016. In 2017, the Guatemalan National Court declared that he could face trial for the Dos Erres Massacre. During the Dos Erres Massacre, members of the Guatemalan military’s Kaibil Unit killed approximately 300 residents of a village called Dos Erres. Many different organizations, such as the Open Society Justice Initiative, have expressed the need for Ríos Montt to face trial again by working with Mayans who are willing to share their stories and testimony.

Today, Guatemalans continue to advocate for justice for those whose lives were tragically taken, and for education about Guatemala’s civil war. Antonia Caba Caba, a man who grew up in a Mayan village during the military raids and was forced into the military, says he wants Americans to “be more understanding when the economic hardship of today forces Guatemalans to flee, yet again, and to try to find a life across the US border.” As one of the least known but bloodiest civil wars of Latin American history, the Guatemalan Civil War’s legacy still resonates with Guatemalans today, who continue to seek justice for the lives lost.