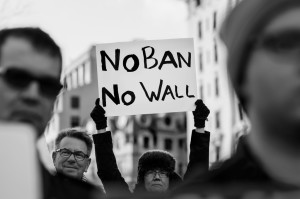 The Trump administration’s first year has been marked with numerous actions that highlight an “America first” narrative. This includes a series of Executive Orders that have outcasted citizens of multiple countries facing conflict and atrocities – countries in need that are now being viewed by the U.S. government as potential threats to national security. Rather than posing a threat, IDPs and refugees seek safety and a life without war and persecution. The U.S. government must help protect, not target, such vulnerable populations. Many of the affected countries are facing dire humanitarian crises, and the ban symbolizes U.S. passivity to, and neglect of, these crises.

When President Donald Trump assumed office in January, he issued Executive Order 13769, titled “Protecting the Nation From Foreign Terrorist Entry into the United States,” which became colloquially known as the “Travel Ban,” and the “Muslim Ban,” effectively banning citizens of seven Muslim-majority countries from entering the United States. The Executive Order extended to U.S. permanent residents, foreign visitors and businesspeople alike, and suspended refugee resettlement in its entirety. It also included language that seemed prejudiced to religious minorities, assumingly Christians instead of Muslims. Right away, the move sparked controversy and protests at airports, and volunteers sought to help those detained or turned back upon their arrival into the U.S. Several federal judges opposed the ban, deeming it constitutional, and five states sued the Trump administration on account of the ban. Eventually, after several court cases, the 9th Circuit Court of Appeals ruled that the government had not provided sufficient evidence of possible threats posed by travelers from the Trump administration’s list of threatening countries.

In light of the legal critiques and mass protest, the Trump administration has been adjusting the ban to comply with federal courts challenges and recommendations. There have been numerous arguments regarding the constitutionality of such a ban, but a prominent one is that it violates of the First Amendment under the Free Exercise Clause as it is specifically aimed toward Muslim countries and that it is a manifestation of the anti-Muslim rhetoric that was a core component of Trump’s presidential campaign.

BAN 2:  Iraqi citizens were removed from the Executive Order; For the first 90 days after the signing of the order, foreign nationals from Sudan, Syria, Somalia, Iran, and Yemen could not travel to the U.S without a visa, but green card holders and students with valid visas were excepted; the indefinite ban on Syrian refugees was removed; the clause excepting refugees from religious minority groups was removed; and a 10-day instead of immediate-effect policy was put in place.

President Trump revised the January ban on March 6, excluding Iraq from the previous list of Muslim-majority countries. The ban was virtually the same, only removing Iraq as a preemptive tactic because Defense Secretary Jim Mattis, “feared it [the travel ban] would hamper coordination to defeat the Islamic State.” For years, Iraqi citizens aided the U.S. during their occupation in the country, placing their lives, and the lives of family members, at risk. A U.S. Embassy official in Baghdad stated, “The U.S. government has determined that it is in the national interest to allow Iraqi Special Immigrant Visa (S.I.V.) holders to continue to travel to the United States.” Additionally, it replaced the complete halt to Syrian refugee entry with a 120-day freeze, exempted permanent residents and visa holders, and dropped language offering preferential status to persecuted religious minorities, namingly Christians.

Ban 3: Restrictions against Sudan were lifted; restrictions were maintained, modified, or eased for Libya, Iran, Syria, Somalia, and Yemen; restrictions and additional vetting were added for Chad, North Korea, and Venezuela.

In late September, the Supreme Court announced that it would not hear the oral arguments from the second travel ban scheduled for October 10, but would accept briefs from both sides on October 5. While the second ban temporarily limited travel for 90 days, the third ban was indefinite and conditions-based rather than time-based. The new restrictions included 8 countries, removing Sudan and adding Chad, Venezuela, and North Korea, with restrictions differing by country and taking effect October 18. Despite the administration’s attempt to justify travel restrictions without emphasizing religion, ACLU director Anthony Romero stated that 6 out of the 8 countries are still Muslim-majority, and that the addition of a ban on North Korea, which has few visitors to the U.S. already, and some government officials from Venezuela do not obfuscate the anti-Muslim goals of the ban.

The third ban was challenged by judges from Hawaii, Maryland, and Washington, D.C. before it could take effect. Maryland district court judge Theodore Chuang persistently pressed Justice Department attorney Hashim Mooppan regarding the classified Department of Homeland Security report that ‘justified’ the third travel ban, to which the DOJ attorney never answered. The district court judge of Hawaii, Derrick K. Watson, blocked the administration from enforcing the ban against any of the seven major Muslim countries and asked the Trump administration to produce the DHS report used to justify the national security act – the administration refused his request and did not produce the report for the court.

BAN 4: Ended the 120-day suspension of refugee processing; called for 90-day review of the program for 11 high-risk, unnamed countries; placed a hold on family reunification process for some refugees resettled in U.S.

On October 24, President Trump issued an executive order titled “Presidential Executive Order on Resuming the United States Refugee Admissions Program with Enhanced Vetting Capabilities,”  to, as stated, “enhance the U.S. Refugee Admissions Program’s (USRAP) vetting capabilities.” The order directly targets refugees, stating that they pose different security risks than foreign nationals who apply for immigrant or nonimmigrant visas and suspends refugee travel to the U.S. and current applications for resettlement. It calls for a 90-day review of the program for 11 unspecified nations that are supposedly high risk. On November 13, a federal court gave Trump “temporary permission to proceed with part of of the third version of his travel ban policy, but it created an exemption from the new restrictions for foreigners with U.S. ties.” This move, a partial win for the Trump administration, is similar to the Supreme Court’s permission of an earlier version of the travel ban which excepted those with a ‘bona fide relationship’ to someone in the U.S.

In addition to the ban’s constitutionality, questions have been raised regarding humanitarian impact. Ongoing conflict and atrocities in many of the targeted countries have resulted in increased numbers of internally displaced persons (IDPs). Refugee and IDP camps are often overpopulated, and food rations are split among great numbers of people. Moreover, there are many people in critical medical condition who seek treatment in the United States, but cannot be treated because they are banned. The humanitarian aid community has repeatedly said that the ban undermines existing United States efforts to aid victims of atrocities and conflict in the listed countries. Additionally, the most recent iteration of the ban completely grinds the refugee resettlement program to a halt, leaving time-sensitive checks to run out for those in the process of resettlement, requiring them to restart the long and arduous process. Rujjares Hansapiromchok is a senior at California State University, Northridge, double majoring in Political Science and Religious Studies, with a minor in African Studies. She is currently a team member of the Communications Task Force for STAND, after learning about STAND  during her internship at Jewish World Watch in Los Angeles. She is passionate about genocide and mass atrocities prevention and hopes to work in the field of peace and conflict resolution in the future.