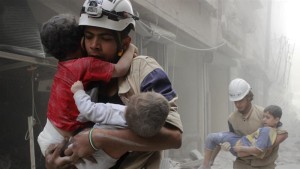 Predicting future atrocities is exceptionally difficult, as one must anticipate reactions from a variety of actors within complex systems. For those of us that use these forecasts to attempt to prevent atrocities, a successful response is one that prevents an atrocity that would have otherwise happened, thus making the forecasts look mistaken. Nevertheless, anticipating the future course of conflicts is a vital component of atrocity prevention, and forecasting efforts are growing increasingly sophisticated. The U.S. Holocaust Memorial Museum’s Early Warning Project and the Council on Foreign Relations Preventive Priorities Survey are among the leading forecasts, and while we aren’t contributing a full forecast, it’s worth looking ahead to conflicts that could deteriorate or emerge in 2017 in order to assist prevention efforts. Civilians have often bore the brunt of conflicts, and sadly 2017 is unlikely to be different.

2016 was a disastrous year for an already horrific conflict, as the Assad regime stepped up its use of sieges and as the fight for Aleppo last month became even harsher than many expected. The rebels are increasingly weak, particularly more moderate factions, and many rebels and civilians who were in formerly rebel-held territory, particularly around Aleppo, have been pushed into Idlib. The possibility remains that civilians that survived the brutal siege of Aleppo will once again face similar circumstances as the Syrian government and its allies push to retake further opposition territory. The U.S.,an increasingly peripheral player in the conflict, was left out of the most recent round of peace talks, and President-Elect Trump seems likely to withdraw support with the opposition and increase cooperation with Russia, a main ally of Assad. Turkey has also become more cooperative with Russia and is now focusing on combatting Kurdish influence rather than supporting the opposition. Already struggling after recent territorial losses, the Islamic State will also likely lose influence in 2017.

Having already caused immense suffering since its start in 2013, South Sudan’s civil war threatens to spiral even further in 2017. Originally caused by a split between President Salva Kiir and Vice President Riek Machar, the SPLM-IO—Machar’s side—has split. Kiir appointed Taban Deng Gai to replace Machar as Vice President, and his decision to force Machar out of the country has left his supporters feeling unrepresented. The repeated failure of political negotiations has led many actors to see violence as their only route to power. Ethnic divisions have also solidified, and the region of Equatoria in particular has seen increased violence. This combination of factors has led to increasingly dire warnings, with the UN announcing that ethnic cleansing is already underway. The international response has been underwhelming, with the UN unable to come to an agreement on a potential arms embargo.

The Muslim ethnic minority group, the Rohingya, has long lived in dire conditions, stripped of citizenship and often forced to live in internally displaced people (IDP) camps. Described as the world’s group most at risk of genocide, there is an ever-lingering risk of a spark setting off mass violence. Aung San Suu Kyi, the de facto leader of the country, and the National League for Democracy (NLD) have shown little interest in the Rohingya and seemingly lack the ability to control the military, who is in charge of managing the situation in Rakhine State. Security forces and members of the Rakhine ethnic group have both perpetrated violence against Rohingya, and the October killing of several police officers—with a group of Rohingya accused to be the attackers—has raised tensions. There are also reports that some Rohingya have reacted to their continued subjection through the creation of an insurgency. However, Rohingya know from experience that any violence they may perpetrate would likely lead to retaliation against Rohingya civilians. Reports of a plan among security forces to arm non-Muslim civilians also raise fears of increased violence. Should the situation deteriorate, almost no Burmese actors seem ready to come to the Rohingya’s defense. As the crisis continues, the government must reconsider its approach to the issue, build positive relations between the majority Buddhist and minority Muslim populations, and cease the use of excessive force against civilians, lest they precipitate the growth of a small number of Rohingya insurgents.

Additionally, ethnic groups around the country—such as the eastern Shan, Karen, Kokang, and Kachin, Ta’ang, and Arakan, now in an alliance—are politically sidelined and face violence at the hands of Myanmar government militias, even after Aung San Suu Kyi’s 21-Century Panglong Conference. There is speculation that the NLD is keeping quiet on the military’s blockade of transport and aid in these areas due to pre-election agreements with the military. Tensions and periodic violence seem unlikely to cease in 2017.

Sudan is primed for significant violence against civilians in 2017, but much of it may remain out of the public spotlight. The Sudanese government has cut off access for journalists and aid workers to areas where it has conducted attacks on civilians, including much of Darfur, and many believe violence in Darfur may be returning towards levels from the height of the conflict. Huge numbers of internally displaced people remain in Sudan with almost no access to aid and few means to support themselves. In addition to Darfur, the Sudanese government continues to bomb civilians in South Kordofan and Blue Nile states. In an extremely alarming development in the conflict, Amnesty International also found evidence of 30 likely chemical attacks against civilians from January to September 2016. There is unlikely to be any large reduction of violence in 2017, as peace talks have broken down and the government remains invested in crushing rebellion. Sudan is also facing reduced international pressure. Many European governments have proved willing to support Sudan in order to prevent refugees from reaching their shores, while the U.S. is rumored to be preparing to lift sanctions.

5) Democratic Republic of the Congo (DRC)

Despite recent progress, uncertainty over President Kabila’s willingness to step down as president suggests conflict could escalate in the country in 2017. Kabila is constitutionally mandated to step down after two terms, and his second term was mandated to end in December 2016. After his pasts effort to amend the constitution to allow a third term failed, Kabila implemented various measures to push back his exit date, frequently citing concerns about the country’s readiness to conduct elections. A recent deal brokered by the Catholic Church calls for President Kabila to step down and elections to be held by the end of 2017, but it is unclear whether Kabila will respect the deal. If he does not, violence will likely escalate as hundreds have already been killed in confrontations between police and protesters. Armed groups outside urban areas have also used ongoing political uncertainty to gain influence and territory. Meanwhile, the largest cause of civilian death in the DRC remains insurgencies in the country’s east, though these groups are far less powerful and are more splintered than they were at their peak.

Though unlikely to escalate significantly, Yemen’s devastating conflict seems likely to grind on. The conflict has moved towards equilibrium with no side strong enough to win, but both also unwilling to give up. On one side of the conflict is the former Yemeni government of Abd Mansur Hadi, heavily backed by a Saudi-led coalition. The Saudis are certain to continue their bombings, as they believe the defeat of the Hadi government would advantage their rival, Iran. The US continues to back the coalition, albeit more tentatively, as a recent decision to block an arms sale signifies. For their part, Hadi’s government has little power but maintains some influence in the south. On the other side, the Houthi rebels maintain control of much of the country, including the capital Sana’a, but are struggling to govern. They remain in an uneasy alliance with former president Ali Abdullah Saleh and receive limited support from Iran. Saudi bombings have frequently hit civilians and the conflict has devastated the economy. Hunger is extremely widespread and the Saudi coalition has repeatedly blocked the delivery of aid, continuously bombing major ports and further threatening aid delivery.

President Pierre Nkurunziza’s decision to seek what is considered by many to be an unconstitutional third term sparked recent conflict in Burundi. Although he is now securely placed in his third term, the situation is far from resolution. Extrajudicial executions continue and thousands have died throughout the course of the conflict. The conflict has remained primarily political rather than ethnic, but there are signs that violence against Tutsi could increase. The Burundian government’s decision to leave the International Criminal Court suggests that their human rights record will not soon improve, and the recent assassination of a government official also raises tensions. Peace talks have stalled since July, when the government pulled out of the talks. Opposition groups were upset last month when chief mediator, former Tanzania President Benjamin Mkapa, urged them to look toward the 2020 elections, seeming to ignore their concerns about the 2015 election. In this context, talks seem unlikely to resume, as the opposition feels slighted, and Nkurunziza feels that he can retain power with no real resistance. An armed insurgency in exile remains capable of conducting attacks, though it holds relatively little power and is unlikely to seriously threaten Nkurunziza’s government. Still, as long as they are denied political rights there is the possibility that more opposition supporters will choose to use violence.

Ethiopia has suffered significant unrest over the last year after protests emerged in the Oromia region. Originally concentrated on feelings of underrepresentation and marginalization of the Oromo ethnic group, the protests have spread to the Amhara region and have given voice to discontent with the government. Long seen as a champion of an authoritarian development model, Ethiopia has cracked down heavily on the protests and shown few signs of a democratic opening. Amnesty International has found that security forces have killed over 800 people since protests began in November 2015. With the opposition also growing increasingly disillusioned with the potential for peaceful change, potential for violence in 2017 is high.

August’s elections could very well proceed successfully and represent democratic progress in Kenya, but they also hold significant potential for conflict. President Uhuru Kenyatta will be contested by Raila Odinga in a repeat of the 2013 election. In the 2007 election, Odinga’s defeat led to violence killing around 1,000 people, while the 2013 election remained quite peaceful. It is unclear which path 2017 will take, but there are warning signs that suggest potential violence. Trust in IEBC, the electoral commission, is low, and blows to Kenyatta’s popularity may cause a highly competitive election. Further, despite demand, the Kenyatta government has struggled to provide reforms, and continued police brutality has incited protests and raised fears of a heavy-handed response in the case of post-election protests. In addition to national elections, 47 counties will also hold local elections, and as ethnic tensions in several parts of the country remain high, it will not take much for localized conflict to erupt.

92-year old President Robert Mugabe’s insistence on staying in power after 36 years in charge threatens to spark conflict in Zimbabwe. 2016 already saw increased resistance to Mugabe, with protests gaining ground in the summer. Youth activists, often using social media to spread messages such as that of previously unknown Pastor Evan Mawawire—the founder of the #ThisFlag movement to end corruption and increase government transparency and accountability—were at the heart of the protests. Police cracked down heavily on protesters, but calls continued to urge Mugabe to step down immediately, rather than wait for elections in 2018 when Mugabe intends to run for re-election. Ongoing economic problems have also damaged the popularity of Mugabe’s government. Still, the potential for Mugabe to be forced from power hinges on a number of uncertainties, including the strengthening of a divided opposition and the military’s loyalty to Mugabe. Two things remain quite a bit more certain: that Mugabe will not cede power easily and many Zimbabweans will wish he would. Featured photo is by The White Helmets.