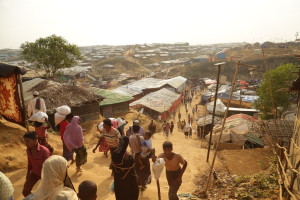 Beginning in August of 2017, the Rohingya people fled persecution from the government of Burma.  Unfortunately, the lives of the approximately 900,000 Rohingya refugees who settled in neighboring Bangladesh have seen limited improvement due to mistreatment by Bangladeshi authorities.  In 2017, there were one million Rohingya Muslims living in Burma, the largest group of Muslim people in the country. The government of Burma did not consider them to be citizens and refused to include them in the 2014 census. Rather than recognizing the Rohingya people as an integral part of their country, the government of Burma considers them to be illegal immigrants from Bangladesh. Rohingya people had been leaving Burma for their safety for years, but after Rohingya Arsa militants attacked 30 police posts, there was a mass exodus.

Now, with 740,000 Rohingya people in Bangladesh, the country has said that it will no longer accept Rohingya refugees. This comes after a failed deal between Bangladesh and Burma to repatriate the Rohingya people. The Bangladeshi government has said that the Rohingya people have simply not volunteered to return to the Rakhine province of Burma because they were afraid of persecution. “It’s very clear:” said Filippo Grandi, UN high commissioner for refugees, “Nobody has gone back because many of those reasons that pushed them out of the country have not yet been addressed.”

On February 21, Bangladesh announced that it would move 100,000 Rohingya refugees to an island in the Bay of Bengal.  The plan is meant to ease the pressure on the Cox’s Bazar refugee camp, but it is more of a way to force people to go back to Burma.  Additionally, human rights activists have noted the danger in such a move as the island is both remote and prone to cyclones. However, the government has said that once there, refugees will only be allowed to leave the island to go back to Burma or to go to a third country which had granted them asylum.  Moreover, the government, denying that the island was a concentration camp, told people that there would be restrictions. For example, the government said that it would not give the refugees Bangladeshi passports or ID cards, indicating that the Rohingya people living in Bangladesh may continue to face the same statelessness and discrimination that they faced while living in Burma.

The Bangladeshi government no longer has the capacity to take care of the refugees.  The UN has sent in aid to people living in the Cox’s Bazar refugee camp, but it is not enough.  Whether the Bangladeshi government is serious that its sole motive is its inability to accommodate all of the refugees or it is intentionally discriminating against these people, a better solution needs to be found.  Other countries must be willing to take Rohingya in if they stand a chance at surviving the ethnic cleansing being perpetrated by their government.

Mira Mehta is a writer and a student at Westfield High School. In her spare time, she enjoys debating and running on the cross country team. This is her second year as a member of the Communications Task Force at STAND.