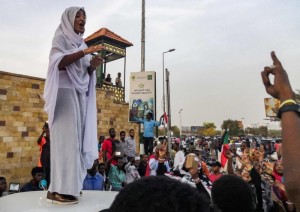 As an organization founded during the height of the movement to end genocide in Darfur, STAND celebrates the removal of Omar al-Bashir from the presidency, while continuing to support Sudanese protesters on the ground. We urge authorities to lift the state of emergency and curfew and facilitate an inclusive civilian-led transitional process alongside the opposition coalition, the Freedom and Change Forces (CFC). Additionally, Bashir, Ahmed Haroun, and Ali Kushayb must be extradited to stand trial at the International Criminal Court.

After months of anti-government protests, Sudan’s military ousted President Omar al-Bashir on Thursday. Defense Minister and First Vice President Ahmed Awad Ibn Auf announced that the government had been dissolved and the Constitution suspended, ending Bashir’s 30 years of authoritarian rule. Bashir, who is wanted by the International Criminal Count on counts of genocide, crimes against humanity, and war crimes, has been taken into custody by the Sudanese military.

Lieutenant General Ibn Auf, who was the head of military intelligence in Sudan during the most violent period of the Darfur genocide, also announced that a three-month state of emergency would be instituted and a two-year transitional government administered by the military would be put into place. He declared that all political detainees would be released and that Sudan would continue to abide by all regional and international agreements.

Several Sudanese activist groups have rejected the military announcement and demanded that power be handed to a civilian government. Protesters have begun chanting against Ibn Auf, who is seen by many as a holdover of Bashir’s regime. Organizers have called on citizens across the country to converge on army headquarters for further demonstrations. “The regime has conducted a military coup to reproduce the same faces and entities that our great people have revolted against,” the Sudanese Professionals Association said in a statement.

Since late December, mass protests across Sudan with the slogans “peaceful, peaceful” and “we are all Darfur” have demanded Bashir’s removal. The former Sudanese government responded to demonstrations with undue force, killing 37 protesters in the first five days. Thousands of demonstrators began a sit-in outside army headquarters and presidential palace in Khartoum on April 6, the 34th anniversary of the 1985 revolution that overthrew former president Ja’afar Numeri. These sit-ins formed the largest rally since protests began. The Ibn Auf has imposed a curfew in an effort to restore order and protect his power, clearly in the hopes of disbanding the sit-in. UN Special Rapporteur Clement Nyaletsossi Voule has condemned the curfew as an infringement on the freedom of expression and peaceful assembly.

The removal of Omar al-Bashir is a crucial step for the future of Sudan. However, it is important to manage expectations and remain vigilant during this delicate transition. Ibn Auf, according to a 2008 U.S. State Department cable, “acted as liaison between the Sudanese government and the Government-supported Janjaweed militias.” As Lieutenant General, Ibn Auf  “also provided logistical support for the Janjaweed and directed attacks.” Sustainable peace in Sudan is predicated on the creation of a civilian administration that constitutes a true break with the former order. We support the demonstrators in their demands for an inclusive transition that will satisfy the democratic hopes of the Sudanese people.