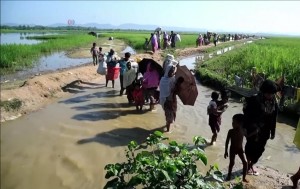 One year ago today, the Burmese military intensified a systematic campaign of violence against the minority Rohingya population, killing 6,700 and causing over 723,000 refugees to flee to Bangladesh.

We, the student leaders of STAND, recognize that the wide-scale violence being taken against the Rohingya is genocide as defined legally by the 1948 Genocide Convention. We call on the international community to hold the Burmese government and military accountable for their actions.

In addition to a recent increase in violence, the Rohingya have historically been a marginalized group within Burma. In 1962, the Muslim minority group were stripped of their citizenship and labeled “illegal immigrants” by the government who speculated that they had arrived from Bangladesh. However, independent reports have recognized their pre-British colonial presence in Northern Arakan. Thus, the Burmese government must recognize and respect the inalienable right of the Rohingya to live in their country.

Recently, in its campaign to ethnically cleanse Burma’s Rakhine State, the military has burned villages, tortured and killed civilians, and raped hundreds of women. Even when refugees make it out of Burma, they live in overcrowded camps that struggle to provide basic living necessities and where the spread of disease is inevitable.

As a student-led organization dedicated to ending genocide and mass atrocities wherever they may occur, STAND acknowledges the suffering of the Rohingya in Burma as genocide and urges the international community to take the necessary steps to ensure that the Rohingya— as well as other ethnic minorities in the country— are not persecuted based upon their ethnic or religious identity.