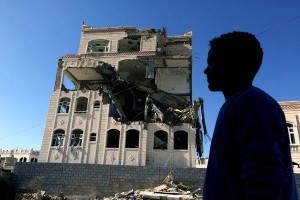 No one is safe in Yemen. Indiscriminate bombings wreak havoc on the citizens of this war-torn country, the latest of which resulted in the death of 51 people, including 40 children. This attack targeted a busy market place and struck a school bus of children on a trip for a Quran memorization program. The influx of victims overwhelmed the nation’s already crippled medical system. While the Saudi-led coalition asserts that this bombing was a “legitimate military operation,” many members of the international community condemn it as yet another horrible consequence that the war in Yemen has had on the lives of its citizens, especially children. This air-strike, however, was only the most recent in a long and disturbing lineage of similar abuses by the Saudi-led coalition. The United States, which is supporting the coalition, is not only condoning the “world’s worst humanitarian crisis,” as the Secretary-General of the UN says, but also playing a role in its execution. When it was reported that the bomb used to kill 40 schoolchildren was US-supplied, it became impossible to deny US participation. The United States is thereby setting a dangerous precedent for its involvement in intranational conflict resolution.

The conflict in Yemen began in September of 2014 when the Houthi rebels, a Shiite group, quietly took over the capital, Sana’a. With the support of former president Ali Abdullah Saleh—who was compelled to resign due to increasing separatist movements—and troops loyal to him, the Houthi undermined the internationally recognized transitional government of President Abd-Rabbu Mansour Hadi. After failing to enact a constitution that hoped to split powers, the Houthi attempted to arrest Hadi but he fled to Saudi Arabia. Saudi Arabia then led a coalition of Gulf states to preserve the recognized government and prevent the Iranian supported Houthi from gaining power via Yemen’s civil war.

Airstrikes have been the coalition’s primary means of combating the rebels in Yemen. The bombing has hit a disturbing number of non-military areas with at least 87 unlawful attacks. In Saada, there have been three times more strikes on non-military locations than military. Even if people are safe from the seemingly arbitrary bombing, they cannot avoid the disastrous effects of the Saudi coalition’s economic warfare. The Saudi-led coalition irregularly enforces a blockade on the rebel area, thus cutting off supplies of food. The airstrikes also have devastated infrastructure and businesses, exacerbating mass unemployment. Food is very limited and, even when available, many cannot afford it. The coalition regularly targets ports, airports, and even marketplaces: in Marib, one market has been hit 24 times alone. Yemen usually imports 80 percent of its food, but with the siege of Hodeidah, the rebel territory would be largely cut off from the outside world. As a result, the region would experience even more starvation and destruction from this coalition’s efforts.

Currently, the United States actively supports this coalition. It continues to share intelligence, complete mid-air refueling of jets, and supply weapons. Instead of using the United States’ unique position of influence with Saudi Arabia to tailor the nation’s involvement in Yemen, it allows the horrible humanitarian crisis to progress. Both countries cite Iranian influence as a means to justify their involvement. Yet, the United States’ continued support suggests the setting of a frightening precedent; regardless of a nation’s record of abuses of its own people, the United States will support a nation as it commits mass atrocities and perpetuates famine. Additionally, Saudi Arabia seemingly cut deals with al-Qaeda in order to more effectively combat the Houthis. The deal included recruiting members to join the coalition and retreat from key towns, which simulated a disappearing threat. As a result, the United States is not simply combating terrorism or ceasing Iranian influence in Yemen: it is supplying and supporting a regime that is empowering terrorism and perpetuating mass atrocities. To prevent this precedent from being set, American citizens must push their legislators to stop the supply of the Saudi-led coalition.