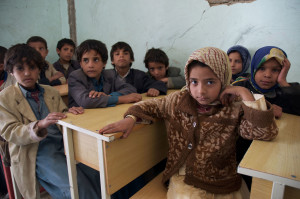 In the United States of America, the average American child’s worries include tricking their mother into letting them eat ice cream before dinner, and making sure to watch their favorite TV show after school. Children in Yemen, where there is a cholera epidemic, have very different worries. Cholera is a bacterial disease that can infect the intestines and cause severe diarrhea, which can lead to dehydration and sometimes even death. This disease can be traced back to the year 1563, and began to appear in the United States in the 1800s. However, because Americans had the right resources, it quickly disappeared and there hasn’t been a deadly case since. Although this disease is easily treatable, Yemen does not possess enough resources or aid to help its victims. Simply boiling water could get rid of the bacteria that causes Cholera, yet people are still dying from this disease every day.

Believed to be the result of man-made acts, Cholera has stolen around 2,000 innocent lives in the span of less than 6 months in Yemen. The country’s ongoing civil war has made aid delivery very difficult. Cholera became a prominent issue in April, and it has already become the worst in history. To put this in perspective, the second worst was Haiti between the years of 2010 and 2017, where the number topped 800,000. In Yemen, this number was surpassed in a mere six months. Those who are more vulnerable or prone to struggle with this disease are ones who are weak and helpless, including young children, starving and malnourished people, and pregnant women and their fetuses. More than half of Cholera victims are younger than 18 years old, and 26% of those children are younger than 5. This epidemic is also robbing unborn children of their lives, before they even have a chance to start them.

Because Yemen is still in the midst of a three year civil war, pitting the Houthi rebel movement against the Saudi-led coalition that stands by President Hadi, the country has not prioritized aiding citizens affected by this epidemic. More than half of the country’s hospitals and clinics have been shut down or destroyed due to bombings and airstrikes. This leaves Yemeni people with no one to turn to in their time of need. Organizations such as World Health Organization and UNICEF have partnered up to act and provide health care in efforts to save lives, and UNICEF has already donated more than 4 million packs of rehydration salts, and 800,000 bags of intravenous fluids. Despite their work, the continued conditions of the war-torn country have also made delivering vaccines and aid extremely difficult, and in July of this year, the United Nations and WHO suspended their cholera vaccine plan in Yemen. George Koury, head of the UN Office for the Coordination of Humanitarian Affairs in Yemen, stated that “It was decided by the professionals that all the risks and the potential problems may outweigh the benefits of administering the vaccine.”

Without increased action, Yemen will continue to suffer from this epidemic and looming famine. Given the lack of access to clean water, sanitation systems, and solid infrastructure, there is no way Yemenis will be able to combat this crisis on their own – but you can help! If we ensure that the United States acts to end the conflict, we can limit the amount of destruction in the country, and pave the way for humanitarian aid and action. Check out STAND’s work to alleviate the crisis and get involved by visiting our #YemenAid action page here.