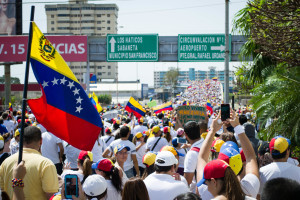 The effects of poverty, corruption, and governmental ineptitude in Venezuela have spiraled into a humanitarian disaster. For most, the easiest way to get food is by rummaging through garbage can after garbage can, hoping that something edible will appear. For most, the next day is not guaranteed. There are no vaccines, very little medication for chronic conditions, and insufficient amounts of medicine in hospitals to treat even the most basic diseases.  Venezuela is devoid of the essentials of life, and the people are suffering beyond anything an outsider could possibly fathom, as layers of problems root themselves deeper in their country.

At the most basic level, Venezuela suffers from an economic crisis.  It stems from poor management of money, exacerbated by the fact that oil, which has recently seen a sharp decline in prices, makes up 90% of its economy. This has led the value of the Venezuelan Bolivar to decrease by more than 99% since President Maduro came to power in 2013. The Bolivar is currently worth less than 10 American cents. The government is only digging itself deeper into debt by printing more currency, which costs more to print than it is worth in circulation.

This economic crisis has harshly manifested itself in the lives of the Venezuelan people. The Venezuelan people face food shortages, periodic blackouts, and unmatched levels of inflation. With the economy in shambles, families cannot get back on their feet, and the government cannot provide enough aid to sustain their people. 11.9% of children in affected areas suffered from acute malnutrition in April, and the number is on the rise. Food is not the only thing that the Venezuelan people are missing. They are also in desperate need of medicine, missing 80% of the medical supplies they need to receive adequate care.

The current state of affairs begs to question — what is the Venezuelan government doing to address these issues? President Maduro has been largely insensitive about his country’s food crisis, saying, “We need to reduce extreme consumption….”. Government officials have also stopped aid from entering the country and simply keep the food and medicine in the packages to themselves. To make matters worse, the government has put new restrictions in place that would prevent household items, like Neosporin, from being brought into the country. All of this is part of the government’s overall prioritization of maintaining power over the citizens rather than ensuring the prosperity of its people.

Venezuela is a democratic country, but in recent years, President Maduro has been consolidating power in what many see as a transition into a dictatorship.  In response, those Venezuelan citizens who can remotely afford it and are willing to take the risk have engaged in numerous protests.  Over the past four months, these protests have become violent, leaving more than 100 people dead so far. Many protesters face imprisonment, with high-profile opposition leaders being taken from their homes in an effort to instill fear in their followers.

The humanitarian crisis facing the Venezuelan people has left them suffering — from grief, from disease, from oppression — but it has also shown the world what courage looks like. Despite numerous obstacles in their lives, the Venezuelan people endure, and they deserve help. The world needs to support them with the material resources and political might that are so critical for their survival. It will take focus and commitment to help the Venezuelan people, but the world must be ready to embrace it.

It is imperative that the world act now, as impoverished countries are more susceptible to civil war, especially countries like Venezuela that are already facing bitter protests and turmoil.  The instability associated with conflict often worsens humanitarian crises and creates a cycle that is nearly impossible to escape, even with the aid of other countries. It can give rise to more conflict with no set government entity or enforcement of peace agreements once a conflict has been resolved. This is one of the reasons why there is conflict in Sudan today — after a series of conflicts, peace agreements and ceasefires were not upheld. Throughout the world, conflict and mass atrocities would be much easier to prevent and resolve if addressed when such problems first appear.

Venezuela needs assistance now if it is to avoid further turmoil, loss, and grief. Mira Mehta is a writer and a student at Westfield High School.  In her spare time, she enjoys running on the cross country team.  This is her first year as a member of the Communications Task Force at STAND.