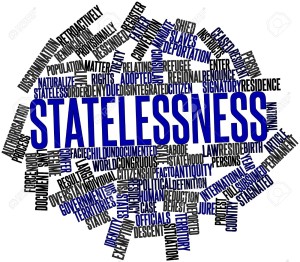 The United Nations Refugee Agency (UNHCR) says that while there are 65.6 million displaced people in the world, ten million of them are stateless people. According to UNHRC, a stateless person is “a person who is not considered as a national by any State under the operation of its law,” and thus without a legally bound home. The United Nations in Article 15 of the Universal Declaration of Human Rights states that “everyone has the right to a nationality,” but many are denied this right. For the average citizen of a well-developed country, this problem seems unrealistic. Citizens of well-developed countries take this right for granted because it is never questioned. Yet, there are stateless people all over the world, and due to the problems that come with statelessness, millions of people suffer every day and are vulnerable to the abuses of unchecked nations.

Statelessness can occur for a myriad of reasons. The United States State Department addresses that some statelessness is caused by naturalization laws, such as laws denying people the ability to obtain citizenship, laws denying a mother the ability to extend her nationality to her child, and laws denying citizenship for children born out of wedlock. Additionally, statelessness can be a result of paperwork mistakes, such as a hospital failing to register a birth or the loss or destruction of documents. While each case is a troubling scenario, the worst is when people are stripped of their citizenship by their nation for belonging to a certain racial or ethnic group. This action destroys the promised protection of individuals, thereby making them vulnerable to atrocities.

When citizen groups – most often minorities – are stripped of their rights and nationality, they become easy targets for persecution. Arguably the most famous case of this action was during the rule of Adolf Hitler in Nazi Germany. The United States Holocaust Memorial Museum asserts that when the Nuremberg Laws were passed in 1935, the Jewish population in Germany lost all of their basic rights. These laws were an early, yet catastrophic, sign of the coming Holocaust, and the abuses Germany’s Jewish population experienced escalated sizably thereafter. Now, in Burma, 1.1 million Rohingya Muslims are considered stateless after the government rescinded their citizenship in 1982. The international community has called the Rohingya “the most persecuted minority in the world,” and a “textbook example of ethnic cleansing.” The aspect of being stateless makes their persecution much easier.

If nations around the world recognized and acted on the problems stateless individuals are forced to deal with, cases like the Holocaust and the persecution of the Rohingya could be minimized or even stopped earlier. Stateless people are not offered the protections of average citizens. As a result, attacking these minorities is relatively easy. For this reason, the United Nations has launched a campaign to end statelessness in ten years. Ultimately, the most difficult aspects of ending statelessness are that it must be a priority of each individual country, and that the true number of stateless people is difficult to ascertain because they are often not included in censuses or they prefer not to report that they are stateless because of the harm that could come from it. Whether the desired conclusion is probable or not, it is definitely a positive movement to combat the genocide and mass atrocities that can result from the denial of citizenship.