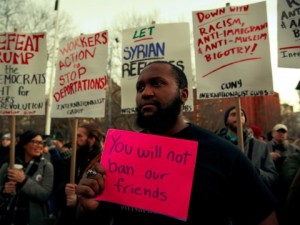 On September 24, the Trump administration released a third version of the travel ban originally issued in January just weeks before the Supreme Court was set to hear oral arguments on the second iteration of this executive order. Although White House officials claim the new policy more narrowly targets national security, immigrant and diaspora communities from affected countries as well as various human rights organizations have criticized the ban for containing the same problems as its predecessors. Because the confusion, chaos, and condemnation that have consistently accompanied the travel ban have rendered it difficult to track its evolution, this article concisely addresses the firm opposition of STAND: The Student-Led Movement to End Mass Atrocities to the ban.

What is different about the most recent travel ban?

The first travel ban banned entry for ninety days by citizens from the Muslim-majority countries of Iran, Iraq, Libya, Somalia, Sudan, Syria, and Yemen and ended the refugee program for Syrians entirely. After this executive order was met with mass protests and struck down by multiple federal courts, including the Ninth Circuit Court of Appeals, the Trump administration issued a second ban, removing Iraq from the list, but otherwise maintaining the original ban. Although the second ban was initially ruled unconstitutional as well, the Supreme Court did allow parts of the ban to go into effect, specifically for foreign nations with no “bona fide relationship with any person or entity in the United States.” The third travel ban, however, is even more extensive than the previous versions. First, it targets more countries, eight in total. Iran, Libya, Somalia, Syria, and Yemen were listed in previous travel bans while Chad, North Korea, and Venezuela were added to this ban. Iraqi travelers face “additional scrutiny,” but are not banned outright. Unlike the first two bans, which temporarily banned entry, this new ban imposes indefinite restrictions. Moreover, this new order contains no exceptions for individuals with “bona fide relationships.”

Why is the travel ban an ineffective way to improve security for Americans?

The argument employed by the Trump administration to justify its travel ban is one of national security. Yet many counterterrorism experts argue that the ban actually is counterproductive to this objective. It weakens the ability of the United States to display global leadership and  bolsters arguments made by terrorist groups that the United States is at war with Islam. Scott Cooper, the founder of Veterans for American Ideals at Human Rights First, notes that blocking refugees in particular will increase instability among allies in the Middle East and dissuade foreign nationals of the countries affected by the travel ban from assisting military operations conducted by the United States, thereby threatening the lives of American soldiers. Refugees are already heavily vetted by numerous intelligence agencies and national security officials are in widespread agreement that the procedure is sufficiently stringent.

What are the harms of the travel ban?

Given the violence and mass atrocities occurring around the world, it is quite concerning that the travel ban—as well as the extremely low refugee quota recently set by the Trump administration—will make it more difficult for refugees to flee from oppression and violence. If the United States wishes to claim that it upholds humanitarian ideals, it should not make it more difficult for the most vulnerable people in the world to seek safety and freedom.

What is the future of the travel ban?

The American Civil Liberties Union (ACLU) recently announced that it would seek an injunction on this travel ban and challenge it in federal court. Anthony Romero, the executive director of the ACLU, released a statement contending that “the newest travel ban is still a Muslim ban at its core, and certainly engages in discrimination based on national origin.” Avideh Moussavian, a senior policy attorney at the National Immigration Law Center, claimed the latest travel ban was simply a new coat of paint and that it would not “repair a house with dangerous structural problems.” As such, the legal battles surrounding the travel ban are almost certainly set to continue. Yet it is important not to simply sit by and wait on the courts. Call your representatives and urge them to publicly oppose the ban, support legal organizations who strive to protect rights such as religious liberty, and donate money to groups who seek to help refugees. Only by standing together can we ensure that this travel ban is quickly abolished. Justin Cole is the Policy Coordinator for STAND: The Student-Led Movement to End Mass Atrocities, and a senior at the University of North Carolina at Chapel Hill where he is currently earning his degree in economics and peace, war, and defense.