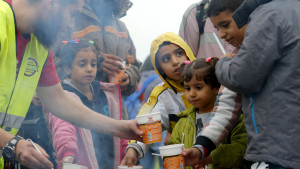 A few weeks ago, then-President-Elect Trump’s transition team offered the first inklings of a troubling, if unsurprising, attitude towards international aid. A four-page questionnaire circulated by the administration probed the government’s current international aid policy, but went far beyond a simple survey, questioning the very moral foundation of international aid itself. One representative question asks, “Why should we spend these funds on Africa when we are suffering here in the U.S?” Under fire is the long-established belief that some of the vast wealth of the United States should be given to those whose levels of poverty are inconceivable to most of us. This attitude additionally fails to consider that much of our present wealth has its foundation in the violent plundering of what has become the “developing world.”

To be sure, there is significant suffering in the United States. In 2015, 43.1 million Americans lived in poverty, over 12% of households were food insecure, with 5% facing very low food security, and almost 20 million living in extreme poverty, with annual income of less than $10,000 for a family of four. There is enormous need in this country, but this need does not eclipse the enormous inequality, both of wealth and opportunity, between the United States and beneficiaries of international aid. The amount of opportunity in our country so significantly eclipses so many others that we are even congressionally-mandated to give away green cards by lottery every year to extend this opportunity to the millions who desperately seek a stable future.

But Trump’s vision for America looks only inward. He believes security stands atop walls, literal and figurative, and thinks we can shut out both our problems and the world’s if we just fill our ears with enough concrete. This view is purposefully imperceptive. It sees terrorism growing in the spaces bombs have flattened, believing that a more extensive campaign of destruction will ensure our safety. It ignores the desperation of poverty and the cries of hopeless despair that develop into fundamentalism and hatred. But Trump should know all about this; after all, a comparable disillusionment pushed just barely-enough Americans to reject our political establishment and vote for him. And it is precisely these conditions of desperation that international aid programs target, often incredibly effectively. Questioned by Trump’s team, PEPFAR is President George W. Bush’s program to fight HIV/AIDS, and it has been instrumental in combating the disease throughout the world. Where once only 50,000 people in Sub-Saharan Africa had access to the same retroviral drug treatment commonly used to treat HIV/AIDS in the United States, now 11.5 million do. The cost of this program for the entire period from 2004-2017 is slightly above $70 billion. This amounts to around $6 billion per year, or less than 0.1% of the federal budget for 2016. The security of the United States depends upon the stability of the world. Would turning our backs to it and withdrawing our support serve anyone at all? That is the selfish argument. It is clear now that for those like Trump, we must demonstrate that helping the world’s most vulnerable is in our own self-interest. But what about empathy? Our president calls for the separation of families, abandons Somali refugees to desolate camps— in some cases likely to be infiltrated by the East African terrorist group Al-Shabaab—and displays a horrific indifference to the millions whose lives have been unjustly imperilled. But these are not the values most Americans share. Suffering will only increase if we pull back aid. Children will die from malnourishment, diseases like HIV/AIDS will spread and tear lives apart, and famine will be even more painfully felt. Can we condone increasing the suffering of so many to pay for walls whose only purpose will be to block our view of the destruction we permit? It certainly won’t stop the trafficking of humans across borders.

Violence will fill the void hope vacates. There is a reason that countries torn apart by war are among the least developed, and this is not to mention the time and resources required to recover. Of course, conflict is not the ideal environment for sustained economic development, but poverty and war feed one another. The forces pushing, for example, South Sudan towards genocide include impoverishment and desperation, fueling anger and hate in turn. The civil war in South Sudan and other situations of extreme violence require immediate short-term solutions as well as long-term, but the only way to prevent these atrocities is to provide these nations with the resources and assistance to pull themselves up and repair the tensions that threaten to erupt into mass killing. While there is evidence that thoughtlessly-distributed aid can exacerbate tensions, foreign aid that is carefully-targeted and cognizant of the social, political, and economic dynamics of the regions in which it is provided can be crucial in staving off the worst effects of poverty that foster conflict. Withdrawing it, experts warn, could further undermine stability in nations like Somalia.

We must recognize that our security, our morality, and our humanity are bound not only to our own circumstances but to those of others. We cannot bury the world’s suffering beneath bricks and mortar. It will climb over.

Grant Schutzman is a recent graduate from Dartmouth College with a degree in linguistics. In June he will be serving with Peace Corps Burkina Faso as a community health volunteer.

* Opinions expressed by STAND bloggers are the authors alone, and do not reflect opinions or official stances of STAND as an organization.