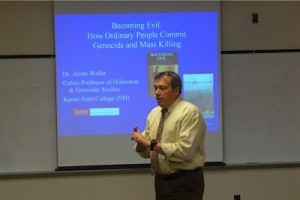 A few weeks ago, I listened to James Waller, a professor of Holocaust and Genocide studies at Keene State College, recount a talk he had with a man who had killed children for a living. During the Rwandan Genocide, this man joined countless others responsible for the murder of hundreds of thousands of children by grabbing their legs and swinging them into a wall. Rwandans are not alone; similar horrific acts of cruelty have taken place in the Holocaust, the Armenian genocide, Cambodia, and even in Westward Expansion in the United States. The question everyone in the audience was thinking as we sat listening to Waller talk was, “what type of person could do something like this?” Waller’s answer: anyone.

Waller’s talk took place at the CANDLES Holocaust Museum in Terre Haute, Indiana, where he was giving a lecture on his investigations into the grunt work of genocide. He was not interested in the architects, the people who planned the mass atrocities; he was interested in the “people who dirtied their hands.” He was invested in trying to understand who these people were and how they were enlisted to perpetrate such extraordinary evil.

So, when he sat down with the murderer, he was surprised to find the man didn’t seem like a terrible person. He seemed like a good guy. In fact, he was a school teacher, who says he “lost himself” during the genocide. I was shocked to hear that, according to Waller, “this description of someone who commits mass atrocities is a lot more common than uncommon.”

If the murderers were innately evil, it would be easy to dismiss them as crazy, which many have tried to do. After recounting his conversation with the man, Waller went on to describe and repudiate the Mad Nazi Thesis, which states, in layman’s terms, that anyone would have to be crazy to participate in something as horrible as genocide. However, scientists put Nazis through thorough mental testing to attempt to find a correlation between intelligence, insanity, and participation in these deeds, and they found none. If we take inherent evilness or insanity out of the equation, something else must be responsible for enabling such monstrous acts. Dr. Waller assigns this blame not to some inherent feature within a sole individual, but rather to the creation of a monstrous collective.

“What groups do is what this microphone does to my voice,” Dr. Waller said, speaking loudly into the mic, “it amplifies it.” The actions of a group can take the little bigotries inside of an individual and create a monster. A group can create a genocide. Waller explained how he began to notice the external factors that transform a person into a killer—factors like a culture influenced by the domination of a single social group or authority, and strong collective values in a nation that may lead to intolerance. These factors can put a culture at greater risk of committing atrocities. This concept is exemplified in the Holocaust, where propaganda, poisonous societal beliefs, and charismatic leaders led economically-distressed Germans to project their frustrations onto minorities.

Contemporary political movements, such as the Alt-right Movement, similarly harness and cultivate the anger of many disenfranchised Americans—those who seek a return to what they perceive as older glory days. These radicals use social media to spread their message in a way similar to how the Nazis spread hateful propaganda. Today, the Alt-right’s widespread use of memes featuring bigoted imagery works to dehumanize anyone who does not match their idea of a model American. Despite what we would like to believe, these are contemporary warning signs that we should notice and address before they escalate.

When economic, social, or military crises ignite pre-existing risk factors, the flames of genocide can begin to take over. Over time, collective cruelty can numb the conscience: individuals simply become a part of a larger cause for which they themselves are not solely responsible. Dehumanization occurs within themselves as well as their victims.

Still, we can always combat such dehumanization. Waller argues, “because genocide is done by normal people, there’s a way to stop it.” Economic empowerment is one key factor. If people are financially independent, they are less likely to become susceptible to the temptations of blaming other groups for their own fears and insecurities; they are less likely to dehumanize others and themselves. Yet this truth is not all. For a person to escape the hatred spread by architects of genocide, they must also physically, mentally, and emotionally isolate themselves from the risk factors that perpetuate atrocities. In order to accomplish this state of independence, one must have access to financial stability, build the critical thinking skills needed to ignore propaganda, and have access to media alternatives to state-run media – which can, in part, be helped by an open and accessible Internet. Activists from low-risk areas can help by supporting information campaigns and advocating for free speech and media. Those who are able to retain their moral compasses will not want to dirty their hands with the crimes of a “hive mind,” advocating for inequality and violence. These are the people who must stand up to prevent mass atrocities.

We may only overlook the horrors of genocide through ignorance or in a trance of inhumanity. By providing the means to avoid that trap, we can preserve the humanity inside potential murderers. Real people become criminals, and as such, it is possible to find a way to end genocide before it starts—by protecting their own humanity and providing equal access to resources and information.

“The lesson we take is most don’t choose to kill, most choose to stand by, but there are many options.”

Ugo Ndife is a high school student in Terre Haute, Indiana. He began his work with STAND as a kid, following his brothers to chapter meetings, and has been involved with STAND ever since. Ugo has a passion for social justice of all kinds, among other things – namely drawing, listening to music, and afternoon napping.