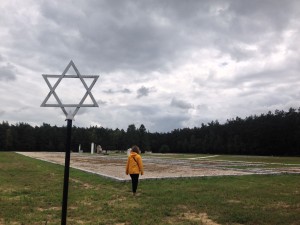 I spent a week in August traveling through Poland with my European Genocides class based in Copenhagen, Denmark. As a genocide prevention activist, I had been anticipating this trip for months, building up expectations in my head for the people I would see and the places I would visit. We visited the cities of Warsaw and Kraków, taking day trips to the former extermination camp of Kulmhof and the concentration and extermination camp of Auschwitz, respectively. I expected these spaces to be dominated by a sense of overwhelming grief. I expected a consensus on feelings and a consensus on facts. I found neither. While I expected to come out of the experience with a “real” understanding of what happened in the Holocaust, what I really came out with were these three questions:

Who owns history? How do we commemorate genocide? And is it possible to show equal respect to the living and the dead?

I realized these questions have no easy answers. Still, they lie at the heart of the state of the camps today: fraught with confusion, fundamental conflict, and questions about the future. Kulmhof, about two hours west of Warsaw, was an extermination camp used intermittently by the   Nazis from 1941-1945. The nearest village, called Dabie, showed the first signs that my expectations would not be met. Poland today is a devoutly Catholic country with over 90% of citizens practicing Catholicism regularly. Prior to WWII, Dabie had significant Catholic, Jewish, and Protestant German populations, with a corresponding Catholic church, synagogue, and Protestant church. Today, the Catholic church is still active, the synagogue has been turned into an apartment building, and the Protestant church, while not in use, will not be sold because it is a Christian establishment. Needless to say, there are no Jews left in Dabie.

My expectations of Kulmhof were somewhat nonexistent. We have come to see Auschwitz as the ultimate death camp and the primary symbol of Nazi terror. As a result, Auschwitz sees some 2 million visitors a year, while Kulmhof and other camps receive only a few tens of thousands. Because Kulmhof was a death camp exclusively and not a concentration camp, there are no structures—only mass graves.Historians estimate that some 185,000 people, almost all Jews, are buried in these graves.The graves are massive, and are marked very subtly by stone barriers. There are a few scattered memorials and almost no visitors, which allowed us time in solitude to reflect on where we were and to remember those who died there, something we did not get on our visit to Auschwitz. The most striking moment of the trip for me was when I looked down and realized there were bone fragments littered all over the ground. I picked up two, buried them, marked their grave with wildflowers, and took a moment to think about the fact that I had just held two people in my hands—people brutally murdered at the hands of ordinary men who were convinced that the extraordinary problems of the world could be blamed on one group of people.

Because no one manages the camp other than the local Polish government, monuments and plaques can be erected by anyone who can pay for them. This, I felt, was very problematic for a few reasons. The first was that I felt that these tributes created a grotesque competition: “We the X family from New York lost 77 members of our family to the Holocaust,” “We the Y family lost 95 members of our family,” and so on. This should never be the source of competition, and those who can afford to pay for memorials should not be memorialized more than those who cannot. The second problem was that the Polish government does not examine these plaques for accuracy. One plaque indicated that 350,000 people lay buried, when in fact the number was 185,000. Holocaust deniers, a force present in Europe and all over the world, point to inaccuracies in official plaques like these to support their skepticism about the Holocaust in general. Auschwitz could not have been more different. On the day we visited, Poland and other Catholic countries were in the middle of a several week-long celebration called World Youth Day. The Auschwitz museum expected a high volume of visitors and subsequently shut down all of the exhibits. My group could not enter any buildings, and each time our professor stopped to tell us information, we were hurried along by 12 to 16-year-old boy and girl scouts who were guarding the camp. There was no time for information, much less for reflection.

In lieu of the exhibits, the museum had put up signs around the camp to provide information that was not normally there. One sign commemorated Maximilian Kolbe: a Catholic priest who sacrificed his life to save others, a heroic action no doubt. What the sign failed to mention was that this Polish priest penned strongly anti-Semitic articles 20 years before as a member of the radical right-wing in Poland. His act at Auschwitz was, of course, heroic. But should his story be commemorated at Auschwitz, the site of the murder of over 1 million Jews? Again, this raises the question of how we commemorate genocide, and for whom. At Auschwitz II, we had a similar experience. Auschwitz II is much larger than Auschwitz and expands for many miles. We walked through a prescribed path—the only one available during the celebration of World Youth Day. We spent much of the day feeling frustrated by how little we could see and by the restrictions on our experience. Towards the end of the walk, we stopped to look at two photographs that depicted Hungarian Jews waiting to go to the gas chamber, some 100 feet behind us.

While looking at the picture, I realized that the trees in the back of the photo were the very same trees that were still standing behind the photograph. The people there sat exactly where I was standing. They could see their families on their way to their deaths; I could see that knowledge in their expressions.

Finally, we began to walk down a long dirt road out of Auschwitz II. From 300 meters away, I noticed a large, blown-up picture of Pope Francis, plastered on an old SS building that had been turned into a Catholic church with a large cross on top of it. His image smiles and waves as he gazes down on the site of mass murder and sheer terror.

Who owns history? How do we commemorate genocide? Is it possible to show equal respect to the living and the dead?

My trip to Poland raised these questions without answering them. I think they have no black and white solution. While I am certain that genocide is unquestionably evil, it is still unclear to me how we may best memorialize genocide. There are logistical problems (who pays for the maintenance of the camps?), religious problems (does the Jewish community have more of a right to the camps than Polish Catholics?), and moral problems (how do we interact with the camps respectfully?).

I came away from this experience with one absolute conviction: all people, and not only genocide prevention activists, must act to end racist extremism. Genocide does not materialize from a vacuum: it results from the calculated efforts of those in power to cast blame on a whole group of people, and from the actions of those beneath them who aid and abet their hatred and violence. Genocide begins with divisive rhetoric, and ends with thousands or millions of lives lost. I refuse to wait until after the fact. We cannot simply stand idly by and hope that ethnic conflicts will improve. We cannot wait to intervene until we see an unacceptable number of bodies in the ground. As mass atrocities continue to threaten millions all over the world, it is time for each and every one of us to fulfill our responsibility to act.

Rachel Allen is a Junior at UNC Chapel Hill studying Political Science and Peace, War, and Defense. She studied human rights at the Danish Institute for Study Abroad in Copenhagen, Denmark for two months this summer.