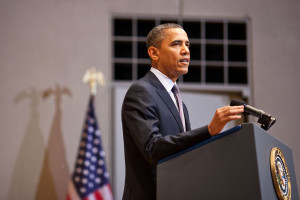 On May 18, President Obama issued Executive Order (EO) 13729, “A Comprehensive Approach to Atrocity Prevention and Response.” The EO is an important step in institutionalizing the Atrocities Prevention Board (APB), which has been meeting since 2012. The APB is an interagency working group that brings together the State Department, the Department of Defense, USAID, the CIA, and more to prioritize and coordinate efforts to prevent mass atrocities. President Obama’s EO emphasizes that “preventing mass atrocities and genocide is a core national security interest and a core moral responsibility of the United States,” outlines the structure and functions of the APB, and directs U.S. agencies to take on a broader atrocity prevention strategy.

So we did it, right? The APB really was that easy!

Not so fast there. While President Obama’s EO is a step in the right direction, we still have work to do. Executive orders don’t have the power of law; they provide direction to agencies within the confines of existing law. The next President could reverse, or simply ignore, the EO, ending the APB.

This means that Congress is needed to legally codify the Board. S.1635, the act authorizing the State Department for fiscal year 2016, also includes authorization for the APB. This bill unanimously passed the Senate and has been referred to the House, but includes a “sunset clause” that would expire the authorization for the APB on June 30, 2017. What we really need is for Congress to pass a law providing permanent authorization. The Genocide and Atrocities Prevention Act (GAPA), S. 2551, does just that.

Well, why do we need the APB and GAPA anyway?

Glad you asked! The APB is a crucial mechanism for U.S. atrocity prevention efforts, allowing for a strong and coordinated response to atrocities. American atrocity prevention policy has historically been weak, so much so that on the day the genocide broke out in Rwanda, Pentagon staff couldn’t remember the names of Rwanda’s primary ethnic groups. The APB ensures that all relevant government agencies are working together to better prioritize the prevention of atrocities well before they break out. GAPA also authorizes the Complex Crises Fund, a flexible funding mechanism which allows rapid response to unforeseen crises and emerging atrocities, and requires atrocity prevention training for foreign service officers.

Assessing the success of atrocity prevention efforts is extremely difficult, as it is nearly impossible to prove specific prevention programs directly caused the absence of certain atrocities. However, even in its few years of existence the APB has helped to improve U.S. engagement to help avert atrocities. In the Central African Republic, a coup and brutal intercommunal violence along religious lines sparked fears of genocide. However, the U.S. government was quickly able to engage diplomatically and with development tools to support peacebuilding programs and the disarmament of rebels. Thanks in part to these efforts, the Central African Republic recently held largely peaceful elections. In Guinea, too, the APB recognized that the stresses of the Ebola crisis could exacerbate existing tensions between communities and quickly implemented preventative programs. Ultimately, there was little violence.

I’m sold! But is Congress?

GAPA already has 24 Senators co-sponsoring the bill–nearly a quarter of the Senate! The bipartisan bill was introduced by Senators Ben Cardin (D-MD) and Thom Tillis (R-NC) along with several of their colleagues. Atrocity prevention is a bipartisan foreign policy priority, dating back to President Ronald Reagan’s signing of the law that ratified the UN Genocide Convention. There are multiple reasons for this consensus. Mechanisms like the APB can help prevent the escalation of conflicts, which avoids putting American troops in harm’s way, and help to protect U.S. security interests. Atrocity prevention is also very cost effective. The amount of money spent on prevention pales in comparison to the funds needed to respond to refugee crises as the result of violent conflict as well as the significant costs of economic disruptions that can limit markets for American businesses.

And, of course, atrocities have enormous human costs. Had atrocities been effectively prevented, Rwandan mothers wouldn’t have had to suffer the loss of their children, a generation of Darfuri children wouldn’t have grown up in refugee camps, and religious minorities in Iraq and Syria would be able to practice their religions in safety. These should be good enough reasons for every Senator to get behind GAPA–but they also have to hear from us, their constituents! It’s important to convey that this is an issue that matters to us.

TLDR; what’s this EO all about? Featured image of President Obama at the U.S. Holocaust Memorial Museum can be found at www.whitehouse.gov