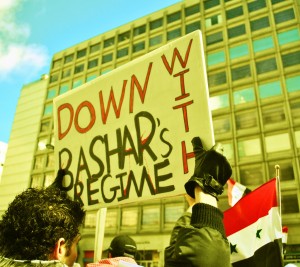 I recently picked up Samantha Power’s “A Problem From Hell” again.

One of the themes of the book is repetitive disappointment. Time and time again, humans worldwide have fallen victim to heinous crimes that were committed without much international resistance. Atrocities were allowed to proceed in Cambodia, Iraq, and Bosnia (among other places) for many reasons, not the least of which was political convenience.

In most cases, perpetrators of genocide, atrocities, and chemical weapons attacks conducted these acts with the knowledge that the world had neither the willpower nor the mechanisms to deliver justice. In almost all cases, we were reluctant to believe, slow to listen, late to mobilize, and horrified by the magnitude of suffering that had occurred. Our world has changed immeasurably since politically uncomfortable reports of Iraqi chemical weapons attacks on Iranian soldiers and Iraqi Kurds fell on unlistening ears in the late ‘80s. If it happened today, we wouldn’t just listen – we would act. Wouldn’t we?

Any form of military intervention in Syria was avoided when the Syrian government agreed to eliminate its entire chemical weapon stockpile. I have issues with what seems to be the conceptual equivalent of a murderer avoiding jail time by turning in his gun, but at least it was progress. Almost a year ago to date, Syria’s declared chemical weapons stockpile was announced to be completely destroyed. Of course, there were always suspicions that the Assad regime was hiding undeclared caches of chemicals, but at least it was progress.

Marking the success, President Obama commented the collective “we” had sent “a clear message that the use of these abhorrent weapons has consequences and will not be tolerated by the international community.” But really, were the consequences so severe?

The Assad regime seems to think not. In early May, US officials accused the regime of continued use of chlorine gas on civilians. In July, The Wall Street Journal published a story headlined “Mission to Purge Syria of Chemical Weapons Comes Up Short”, which was exactly what it sounds like. Two weeks ago, the UN adopted a measure to finally identify the party(s) responsible for chemical weapons attacks in Syria. Even after perpetrators are officially identified after years of essentially unimpeded use, prosecution could be “years or more than a decade away.” It doesn’t take an expert to see the similarities between the atrocities occurring and Syria and those that occurred in Iraq, Bosnia, and many other places before.

I think there is value in reflecting on the failures of our conventions and red lines, just as there is value in considering that we are likely underestimating the number of casualties caused by chemical weapons in Syria – just as we have in conflicts before. In “A Problem From Hell” (2002), Ambassador Power notes her fear that the “Kosovo intervention and the Milosevic trial, once thought to mark important precedents, may come to represent high-water marks in genocide prevention and punishment”. Thirteen years later, the water level is mostly unchanged. We have grown better at believing (mostly), and the international community does a whole lot of listening now. Still, that’s not enough.

We have the evidence, and we have the responsibility to act on it. If we choose to forget past lessons and drag our feet even more in Syria, we’ll again be horrified by the magnitude of suffering we inevitably uncover.