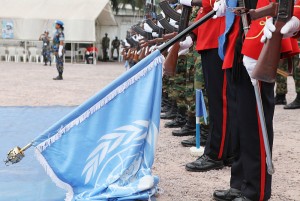 Babacar Gaye, head of the U.N. peacekeeping mission in the Central African Republic, has resigned following allegations of misconduct by peacekeeping forces in the nation. The resignation comes at the request of Secretary-General Ban Ki-moon expressing that he is “angered and ashamed” in regards to the alleged misconduct. From last month alone, Gaye had repatriated at least six peacekeepers in regards to alleged offenses. In his resignation letter, he states a “systemic problem warranting consideration at the highest level of the organization.”

The peacekeeping force in the Central African Republic faces 57 allegations of possible misconduct ranging from sexual abuse to unjustified killings. In this month alone, Amnesty International has accused peacekeepers of raping a 12-year-old girl and indiscriminately killing a 16-year-old boy and his father. A string of allegations has also arisen on the sexual abuse of street children in Bangui by peacekeepers. Médecins Sans Frontières reports treating a total of four minors who were sexually abused and state that their perpetrators were U.N. peacekeepers.

To incite even more frustration about the situation, the U.N. has little to no ability to prosecute the peacekeepers who are virtually on loan from national militaries. The only course of action is for the U.N. to force repatriation and then compel the governments to investigate and prosecute their own soldiers. This ultimately comes to no avail as the trouble with these international peacekeepers is almost unavoidable. The peacekeepers tend to come from poorer countries such as Bangladesh, Ethiopia, Nepal, and Pakistan, which often indiscriminately recruit for their armed forces, leading to poor discipline and command practices. Adding the factor of the dangerous circumstances in which these forces are placed, the situation becomes worse.

The nation of roughly five million has been in turmoil for years, with a series of various coups and temporary presidents. Additionally, the Central African Republic is one of the poorest countries in the world with some 60% of the population still in need of aid and humanitarian assistance. The current conflict stems from fighting between primarily-Christian and primarily-Muslim militias, with U.N. involvement increasing after Muslim rebels ousted President Bozizé in March 2013. In 2014, the United Nations authorized a peacekeeping force of roughly 12,000 troops.  While the Central African Republic seems to be entering a post-conflict phase, there is still instability within the government and the nation is somewhat split, with the primarily-Christian militants controlling the South and West of the country while the opposing primarily-Muslim militants control the more sparsely populated North and East.. The violence has caused a massive humanitarian crisis, with thousands displaced and in need of aid.

While the resignation of Gaye has been a step in the right direction for improvement of the mission, the shocking reports of sexual abuse have also called for increased resignations and prosecution of others who holdad responsibility for the misconduct. The United Nations will be sending individuals from its internal investigation unit to the Central African Republic in coming days. However, the U.N. mission is still being investigated over its handling of the allegations of child sexual abuse by French troops last year. Ban Ki-moon has called for a special session of the U.N. Security Council over the issue of sexual abuse allegations; all heads of peacekeeping missions will be present.

Gaye’s replacement will be Parfait Onanga-Anyanga of Gabon, who recently lead the U.N. peacekeeping mission in Burundi. Onanga-Anyanga was also the previous director of the office of the U.N. Deputy Secretary-General. While a personnel change is direly needed, direct investigations and effective prosecution will be needed to ensure that the structures that allowed these offenses to occur are abolished. Apart from the prosecutions of those responsible, the institution of selecting those who are allowed to serve needs to be analyzed and revised to ensure that the possibility of misconduct occurring on such a large scale is eliminated.

Amit Sen is a junior at the University of Arizona majoring in Computer Science and Global Studies. He currently serves as STAND’s West Coast Regional Organizer and runs the U of A STAND chapter.