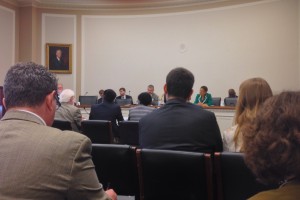 Burundi erupted into protest following President Nkurunziza’s controversial bid for a third term on April 28. He was appointed as a candidate by the ruling party, CNDD-FDD, in April and in the following month, the Constitutional Court ruled that Nkurunziza was allowed to stand for a third term–a decision which resulted in massive protests and an attempted government coup. Most argue that the decision by the court was coerced and that it conflicts with the Arusha Accords that ended the twelve-year civil war. Protests left around 100 dead and more than 100,000 displaced. On July 21st, Nkurunziza was elected to his third term as president with 69 percent of the vote.

As a Burundian, the recent controversy and possible ethnic violence in Dr. Elavie Ndura’s home country is personal. She expressed, “When I talk about ethnicity, it is real. I have focused my entire professional career on education.” She outlined the long history of ethnicity in Burundi. From 1962-1992, divisions set by the Belgian colonial authority remained, leaving the minority Tutsi population in power. In 1993, the country hosted its first multiparty election. The first Hutu president, Melchior Ndadaye, was elected by the civilian population only to be overthrown and assassinated three months later, resulting in a civil war that lasted until the 2005 Arusha Accords.

In order to ensure that interethnic violence doesn’t erupt, Ndura argued that the Arusha Accords must be upheld, a concerted effort must be taken to decrease the gap between the elite and the community, political leaders must have the interests of the community at heart rather than their self-interest, and education must be used to reintegrate the concept of ubuntu or “human kindness” into the society.

Mike Jobbins, Director of Global Affairs for Search for Common Ground, outlined three observations on the conflict in Burundi. To begin with, Jobbins noted the importance of unyielding poverty in Burundi and significant food scarcity, which is not expected to improve dramatically by 2050. Under these circumstances, he believes it unreasonable to suggest that Burundi can exist without political conflict in the near future. First, regional actors must help find an agreeable solution to the conflict, which the US can support by working with the newly appointed special envoy to the Lakes Region, Tom Perriello. In the long-term, a Truth and Reconciliation Committee must be established to address recent political violence, and the country must commit to increasing food security.

Ms. Alissa Wilson, Public Education and Advocacy Coordinator for Africa for the American Friends Service Committee, expressed that the success of AFSC in Burundi was encouraged by communities engaging in dialogue and by AFSC engaging religious leaders to work for peacebuilding.

Wilson argued that the U.S. should revitalize the peace process by working with Tom Perriello to re-engage civil society groups to promote reconciliation and allocating more funds to conflict prevention rather than committing funds after violence has erupted. According to the Carnegie Commission on Preventing Deadly Conflict, “investing early to prevent conflicts from escalating into violent crises is, on average, 60 times more cost effective than intervening after violence erupts.”

Like many of his peers, Steve McDonald of the Woodrow Wilson Center for Scholars stressed the importance of working with civil society groups to stem the violence and promote reconciliation in order to prevent a possible genocide prompted by inter-ethnic violence. In addition, accountability must be upheld with the establishment of a Truth and Reconciliation Commission, and Nkurunziza should be informed by regional actors that he has violated international agreements. All the while, the United States should ensure democratic elections in 2020.

Many of the speakers insisted on the importance of upholding the Arusha Accords and utilizing local NGOs and civil society groups to promote establishment of a Truth and Reconciliation Commission. Some were surprised that despite the country’s history of ethnic violence, the country did not fracture along those lines. In order to find a sustainable peace in Burundi, we must carefully consider both short-term and long-term solutions to the conflict.