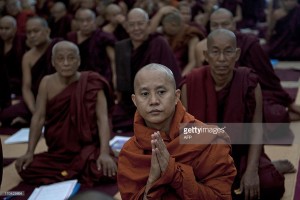 Meet Ashin Wirathu, your everyday Buddhist monk who just so happens to be propagating anti-Muslim hate speech in Burma. Looks can be deceiving. Just like every run of the mill monk, he is draped in saffron robes and boasts a shaved head. However, with relatively little digging on the web, or with the opening of his mouth, you will soon be enlightened. This is not the kind of enlightenment that the Buddha found under the bodhi tree, but rather one of utmost surprise as the sharp rhetoric against the Rohingya population in Burma spills out of his mouth with a cooing tone.

The monk boasts over 68,000 followers on Facebook and his following stretches across Burma. He was released early from prison in 2010 after being dealt a twenty-five year sentence for propagating anti-Muslim hate speech–a symptom of the opening free expression in the country. But things can get worse. In late June, a collective of Thai monks agreed to help spread the message of this hardened Burmese monk by setting up a radio, according to French 24 News. This is eerily reminiscent of the 1994 Rwandan genocide when the RTLM Radio broadcasted hate speech against the minority Tutsi population, calling for their extermination. Failure to examine the case of one of the world’s most persecuted minorities, the Rohingya, would be appalling.

The Rohingya are a Muslim ethnic minority group largely inhabiting Burma’s northwestern Rakhine state. Their population of about 1.3 million makes up nearly a third of Rakhine state. The Rohingya’s origin in Burma traces back to the 15th century Arakan Kingdom. Unfortunately, the Burmese government recognizes them only as Bengali migrants, denying them citizenship rights largely due to the singular Burmese Buddhist identity propagated following colonial rule. However, the etymological root of their name with “Rohang” meaning “Arakan” and “gya” meaning “from” show evidence of their long time presence in Burma.

Phil Robertson, deputy Asia director for Human Rights Watch stated, “The Burmese government engaged in a campaign of ethnic cleansing against the Rohingya that continues today through the denial of aid and restrictions on movement.” Some 140,000 Rohingya Muslims have been forced to leave their homes due to organized coordinated attacks in Rakhine state. 120,000 more have fled the country by boat since 2012, according to United to End Genocide. Grievances faced by the Rohingya were recently brought to light when thousands of Rohingya migrants were stranded in the Andaman Sea off of the coast of Thailand.

Many Rohingya are now living in quasi “concentration camps” with little access to foreign aid due to government impediment. Matthew Smith of Fortify Rights stressed, “Aid is still being obstructed by the authorities in a variety of ways, and this appears to be symptomatic of the shared feeling among government officials at all levels that the Rohingya don’t belong in Rakhine state.”

Though the government has a role to play, violence against the Rohingya would not have escalated to this extent if not for men like Wirathu stoking the flames of the fire. The monk leads a monastery of 2,500 and, ironically, calls himself the “Burmese Bin Laden.” Vile words drip from his mouth, reducing the Rohingya to no more than animals: “Muslims are like African catfish. They breed rapidly.” Furthermore, Wirathu is able to spread this hate with no fear of reprisal. As his virulent rhetoric leaves Mandalay and stretches across the country, the threat against Rohingya increases.

According to United to End Genocide, in order for justice and equality to be attained in Burma, certain forward steps need to be taken by the Burmese government and the international community. To begin with, the government must recognize the existence of the Rohingya and grant them equal citizenship. The international community must help establish an international commission to investigate the continuous violence committed against the Rohingya population. Then, set benchmarks should be established contingent upon the behavior of the state and its members. The “Specially Designated Nationals” list that should also be updated.

Additionally, local-level reconciliation and social cohesion programs should not be overlooked. For example, the youth-led #MyFriend selfie campaign, which encourages youth to look beyond religion and ethnicity, should serve as a way to mend relations between diverse religious and ethnic backgrounds, and create a future free of ethnic and religious hatred.

The United States must do its part in preventing a genocide in Burma. If we simply sit by while the Rohingya suffer, we may as well have our own broadcast on the new hate radio.