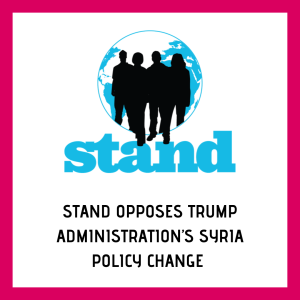 U.S. policy ought to be shaped by us, not dictators abroad.

On October 7th, 2019, the Trump Administration announced a change in United States foreign policy in Syria following a phone call with Turkish President Erdogan. This change would remove U.S. troops from a Kurdish-controlled border region, where they have been preventing conflict between the Turks and Kurds so as to maintain the delicate balance in the war against ISIS and Bashar al-Assad. This change opens up the floodgates for Turkey to attack the Kurds, a persecuted ethnic group and embattled ally of the United States.

In 2011, Syrian civilians challenged the autocratic rule of President Bashar al-Assad in nonviolent protests, which quickly morphed into a civil war. Assad launched a vicious counterinsurgency and has managed to hold on to power with help from allies Russia and Iran, who have prevented international action against the Assad regime. Since the beginning of the war, a number of often brutal armed groups have entered the conflict, including ISIS and Jabhat al-Nusra. The conflict has killed hundreds of thousands of people and displaced millions. According to Mercy Corps, over 11 million refugees have fled their homes, and less than half of the necessary humanitarian aid has been provisioned.

While the U.S. government lacks leverage over most actors in the conflict, and have not been perfect actors during the conflict, there are measures it can take to help. These include engaging in diplomatic negotiations, ensuring any foreign intervention prioritizes civilian protection and anticipates potential political solutions, and giving substantial financial support to the millions of refugees displaced by the conflict as well as humanitarian aid during the crisis. Implementation of the landmark 2017 Geneva peace talks on Syria policies or restarting diplomatic talks again to end the crisis is unlikely without U.S. presence to mitigate conflict between the Turks and Kurds.

Furthermore, as this U.S. policy change was a result of Turkey’s President Erdogan, STAND strongly asserts that foreign policy ought to be shaped by U.S. citizens and diplomats, and especially not foreign leaders with an interest or history in perpetuating genocide. President Erdogan has refused to recognize the Armenian genocide or reconcile with its lasting impacts, despite campaign promises and international pressure to do so. Along with a history of authoritarianism, human rights abuses, and corruption, Erdogan’s administration has also been accused of having close ties with the Islamic State, proving that he should not influence U.S. foreign policy.

We thank our members of Congress, especially in the Senate, who have criticized the President’s move, leading to a partial reversal of policy Monday afternoon—but this is not enough. The United States ought to work with the United Nations on implementing the Geneva peace talks provisions or reopening diplomacy talks to secure a humanitarian-focused solution to the crisis, pass the GRACE Act to allow more Syrian refugees to safely find a new home, and increase humanitarian aid funding.

About STAND: The Student-Led Movement to End Mass Atrocities

Born out of the fight to stop the genocide in Darfur, Sudan, STAND’s purpose has four pillars: to prevent, respond to, and rebuild after mass atrocities by empowering youth to act. STAND is led by a Student Director, chosen annually, and a Managing Committee comprised of college and high school students across the United States and is the only student-led organization focused on genocide and atrocity prevention. STAND is affiliated with the Aegis Trust, a UK-based nonprofit. For more information or to get involved, visit the website, standnow.org or contact info@standnow.org.