Recent events related to U.S. foreign policy in Syria and U.S.-Turkey relations have been major news in the past couple of weeks, but it can be tricky to follow along with all of the details. STAND has compiled some key questions to help you better understand the context and add avenues for engagement. These are short answers to very complex questions, so please feel free to connect with STAND for more information (info@standnow.org).

On October 7th, 2019, the Trump Administration announced a change in United States foreign policy in Syria following a phone call with President Erdogan of Turkey. This change would remove U.S. troops from a Kurdish-controlled border region in Syria, where they have been preventing conflict between the Turks and Kurds and maintaining the delicate balance in the war against ISIS and Bashar al-Assad. This change opened up the floodgates for Turkey to attack the Kurds, a persecuted ethnic group and embattled ally of the United States. For more information on how the U.S. withdrawal of troops in Syria is complicit in the targeting of the Kurdish population in Syria, please read STAND’s previous statement here.

Who are the Kurds?

The Kurds are an ethnic group with large populations in Syria, Turkey, Iraq, and Iran. However, they do not make up a majority in any country. They are the largest ethnic minority in Syria and previously made up 5-10% percent of the Syrian population as of 2011. Most Syrians Kurds live close to the border with Turkey in the north. The United States has a long and complex relationship with Kurdish peoples.

How did the Kurds become U.S. allies?

A Kurdish militia, known as People’s Protection Units, or Y.P.G., was one of the many factions that sought control of Syria as civil war broke out in 2011-2012. Y.P.G. became recognized as effective in taking on extremists. The international coalition led by the United States selected the Kurdish militia as a local partner. Gradually, the militia forced ISIS out of northern Syria and gained control of the land, including much of the border with Turkey.

Why does Turkey see the Kurds as a threat?

The Turkish government is afraid dissidents and/or insurgents may find a safe haven in the Kurdish controlled area so close to its border. The Turkish government sees the Y.P.G. as an extension of a terrorist group, claiming it is an offshoot of the Kurdistan Workers’ Party, which has waged a decades-long insurgency inside Turkey. However, the militia in Syria has made efforts to distance itself from this affiliation. The Y.P.G. now makes up the majority of the Syrian Democratic Forces, which was founded in 2015 and also includes Arab and Assyrian militias.

Why are there concerns about ethnic cleansing?

After the withdrawal of U.S. troops from Syria, Turkey has continued to target the Kurds, a stateless population, American ally, and group with a long history of persecution.  On Thursday, October 17th, President Trump made a statement regarding Turkey’s “pause in fighting” in Syria. In this statement, he referenced Tukey’s campaign to remove Kurdish fighters and their families saying “they had to have it cleaned out.” This language, combined with the actions of Turkey in removing these individuals, coincide with the acts of ethnic cleansing as defined by U.N. entities. Additionally, President Trump referenced the fleeing of the Kurds during this pause in fighting as an “incredible outcome.”

This decision is especially alarming given the Turkish government’s earlier statements. In August, President Erdogan proclaimed, “Turkey has the right to eliminate all threats against its national security[…]. God willing, we will carry the process started with Afrin and Jarablus (previous offensives into Syria) to the next stage very soon.” Erdogan has also refused to recognize the Armenian genocide or reconcile with its lasting impacts, despite campaign promises and international pressure to do so. The U.S. government reportedly considered finally recognizing the Armenian genocide in order to pressure the Turkish government, but decided not to do so.

Politicians and activists have warned about the likelihood of ethnic cleansing and even genocide, including Senators briefed on classified information, SDF leadership, presidential candidates, and diaspora groups.

What is ethnic cleansing?

Ethnic cleansing, while not legally defined by the U.N. General Assembly, was defined by the U.N. Commission of Experts in relation to crimes committed in the former Yugoslavia. It is considered the intentional removal of the civilian population of one ethnic or religious group from a geographic area by another ethnic or religious group via the means of violence and terror. In this report, the Commission concluded that ethnic cleansing can constitute crimes against humanity and war crimes.

What can be considered as acts of ethnic cleansing?

The following acts, and more, when committed with the intent of removing a civilian population:

Is there a difference between ethnic cleansing and genocide?

While the lines are somewhat blurry, and the difference between definitions of ethnic cleansing and genocide can appear somewhat unclear, there are several points of distinction between the two crimes. Genocide, as defined by the United Nations Genocide Convention, includes acts committed with the intent to destroy a national, ethnic, racial, or religious group. These acts can include killing members of the group but also other acts such as causing serious bodily or mental harm to the group or preventing births within the group.

Ethnic cleansing goes beyond this definition to include acts committed with the intent of “removing a civilian population” from a certain geographic area — not necessarily the destruction of said group. This definition can encompass some acts similar to those above but importantly include the forced removal, displacement, and deportation of ethnic and religious groups.

How can I take action to address this situation?

There will be two hearings in Congress on Syria this week:

You can watch these hearings via C-SPAN or online via the links above.

The House passed a joint resolution on this policy change. If your Rep voted yes, thank them!

A similar resolution was introduced in the Senate. Call your Senators to urge their support. 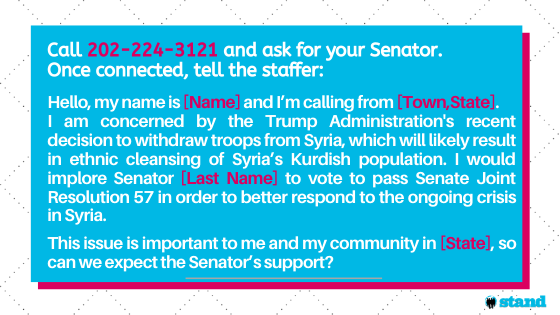 If you do call, be sure to let us know so that we can help you follow up with their office, and we can keep a record of activists who are engaged on this issue.

Where can I find more resources?