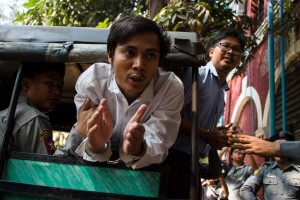 In December 2018, the United States Holocaust Memorial Museum (USHMM) reported that there is compelling evidence that violence against the Rohingya crisis is genocidal in nature. The report condemns the mass atrocities that the Rohingya population has suffered at the hands of the Burmese military – including crimes against humanity and ethnic cleansing.

In September 2018, two Reuters journalists were sentenced for 7 years in prison for investigating the Rohingya genocide. The journalists, Wa Lone and Kyaw Soe, were detained and arrested for violating Burma’s Official Security Act on December 12, 2017.

Prior to his arrest, Lone had spent weeks investigating Battalion 8, a military unit in the northern Rakhine state. His investigation led him to acquire photographs of a group of Rohingya Muslims before and after they were killed. In the background of some of these pictures were members of Battalion 8. Lone’s Reuters article outlined the murder of the ten individuals, uncovering startling practices within the  Burmese government, and ultimately leading to the journalists’ arrests.

Since then, Reuters has published several articles tracking the legal journey of these journalists and advocating for their release. A Reuters Investigation into their arrest found that Wa Lone was deceived by a phone call from Naing Lin, a corporal in Myanmar’s 8th Battalion. The officer urged Lone to meet him on the outskirts of Yangon. Lone questioned why the police would want to meet him at night, but after discussion with other reporters decided to go.

Lone took another reporter, Kyaw Soe, and met the officer in a beer garden. The officer told the reporters about being under attack by Rohingya insurgents. At the end of the conversation, the colonel handed Lone a copy of the newspaper containing documents inside. As the reporters left the restaurant, they were surrounded by men in civilian clothes and arrested.

In September 2018, both men were found guilty in a trial and sentenced to prison for seven years. The United Nations, Canada, Australia, and United Kingdom have condemned the verdict. British Foreign Secretary Jeremy Hunt has publicly claimed that the two journalists are innocent, recording a series of videos on Twitter to demonstrate his commitment to bringing justice to both the Rohingya and the journalists. Time Magazine has named Lone and Soe as Persons of the Year for documenting the deaths of the ten Rohingya. Ben Goldberger, Time Magazine’s assistant managing editor, said that he hoped it was “a reminder of the importance of defending free expression and the pursuit of truth and facts.”

In the first week of January, the journalists appealed their imprisonment but were rejected by the Yangon High Court, crushing their remaining hopes. Lone’s wife, Pan Ei Mon, who had given birth to a baby girl since her husband’s imprisonment, was saddened by the results. She stated, “Since I became pregnant, I stayed strong on the hope that Wa Lone would be released. After yesterday’s verdict, if feels like my hopes have been destroyed.”

Next steps that the journalists can take include advocating for a presidential pardon or an appeal to Burma’s Supreme Court. The current president of Burma could be difficult to win over, however, as a loyalist to Aung San Suu Kyi. Since the beginning of the Rohingya genocide, her reputation as a Nobel Peace Prize laureate has been tarnished due to her continued disregard for the plight of ethnic minorities in Burma. Notably, the United States Holocaust Memorial Museum revoked their prestigious Elie Wiesel Award from her in March 2018 because of her inaction on the Rohingya crisis, and some reports label her an authoritarian due to the arrest of 135 journalists since her election. She has denied that Lone and Soe were jailed because they were journalists. Because of these recent actions, UN investigators claim that she has failed to use her “moral authority” for the better.

The arrest of the journalists shows that in an age of politics where the pursuit of the truth is endangering, we must support those upholding the values of truth and justice. You can stay up to date on the journalists’ legal case here.