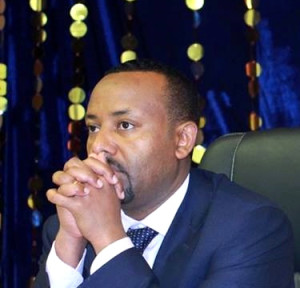 The ethnic divisions within Ethiopia have physically separated Ethiopians for the past century, making it difficult for the government to rule over the nation. Most of the 80 diverse ethnic groups speak different languages and have varying customs, making it even more troublesome for leaders to communicate with their  people. However, there are new hopes set for the future of Ethiopians as Prime Minister Abiy Ahmed attempts to enforce several liberal policies to nationalize all Ethiopians.

Ahmed’s upbringing— his own father a Muslim Oromo and his mother Christian—  shaped his identity and understanding of the differences and conflicts between ethnic and religious groups in Ethiopia. This, coupled with his education, has allowed him to create a modern and liberal political agenda that creates a promising future for Ethiopians. Although it has only been a few months into his term, Ethiopians around the world are calling it  ‘historic’.

One of Ahmed’s most recent controversial and clever tactics included a three-city tour in America in which he talked to thousands of Ethiopians about a unified identity. His knowledge of English in addition to Oromo, Amharic, and Tigrinya allowed him to directly speak to the Ethiopians. He urged the importance of identifying as an Ethiopian, stating that “if you want to be the pride of your generation, then you must decide that Oromos, Amharas, Wolaytas, Gurages, and Sites are all equally Ethiopian.” This is a direct reinforcement of his famous campaign slogan “Break the Wall, Build the Bridge”, which is a reference to his agenda in nationalizing the people of his country. The Minnesotan crowd, mostly with Oromo Ethiopians, cheered, even sporting apparel representing Ahmed’s slogans and their Ethiopian pride. Minnesotan Ethiopians expressed a sense of relief and joy that Ahmed came directly to America to speak with them.

Another agenda item was to discuss the reforms regarding violence in Ethiopia. The recent violent outbreaks between two Ethiopian ethnic groups, Ormo and Somali, led to thousands of displaced families and injured people. This was labeled as a ‘humanitarian crisis’ by the Minnesota Council City Member, and Minnesotans urged change. Although Ahmed has not resolved the issue at hand, he has made an important step towards preventing future conflicts by discussing it. Additionally, he has closed the Makelawi detention center, which has been consistently described as a ‘torture chamber,’ and which is infamous for the detainment of the chairman of Oromon Federalist Congress Bekele Gerba. Many of its prisoners were transferred into the Addis Abbeia detention facility, and some were even released. This is a big step towards human rights reforms, which has consistently been pressured upon ever since its multitude of human rights violations.

In addition to visiting American cities and interacting with fellow Ethiopians, Ahmed also spoke with Vice President Mike Pence about issues concerning another East African country: South Sudan. South Sudan is known for its past history with Sudan and the current displacement of 4 million people due to its internal civil war. Ahmed expressed interest in South Sudan’s oil resources and considered the opportunities for economic prosperity for both countries. The Grand Renaissance Dam, expected to more than double Ethiopia’s current electricity production, is scheduled to be completed in a few years, however, Ethiopia still needs oil to power it. Ahmed proposed an economic agreement that he seeks to pursue in the future.
In pursuit of such an agreement, Ahmed has recently welcomed all South Sudanese with open arms, following the Kenyan police attack on South Sudan. As the Kenyan police tortured and displaced thousands of families, the South Sudanese looked towards Ahmed for comfort as he was recorded praising his East African identity and South Sudan itself, stating “we are brothers” and  “South Sudan is a great country, and you will need it in the future”. His praise of South Sudan came from his understanding of what civil war can do to a country. He also further introduced the idea of identity, claiming “we are members of the East African Community”. The sense of unity that Ahmed brings gives hope to the future of the Ethiopian and Sudanese relationship and their respective economies.

Aisha Saleem is a member of the STAND Communications Task Force. She is a first year at Barnard College in New York, and is undecided about her major. She is passionate about human rights and interested in urban studies