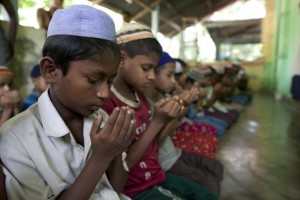 Since 2012, 120,000 Rohingya have fled from Burma in an ongoing humanitarian crisis that the Office of the UN High Commissioner for Human Rights has described as involving crimes against humanity. Despite countless horrific stories of mass killings, rape, and razing of Rohingya villages at the hands of the Burmese military, the precise number of Rohingya killed in these tragedies is unknown. Though the UN reported the deaths of thousands of Rohingya in February of this year, the Burmese government continues to deny allegations of mass atrocities being committed against the group. The government also denies the Rohingya citizenship, and thus the right to basic human rights protections. Since 1948, 1.5 million Rohingya have fled the country, primarily to Bangladesh, while the remaining population has been forced into internment camps, where they are subjected to oppressive conditions and paltry access to food and healthcare.

The history of tensions surrounding the presence of the Rohingya in Burma is centuries-old and has yielded profound political ramifications, making negotiations and reconciliation difficult. Burma’s response to UN calls for investigations of potential human rights violations has been widely dismissive, denying the level of violence refugees have attested to in the first place. Why are the Rohingya facing this persecution? And why does the Burmese government deny the violence pitted against them? In order for concerned citizens and activists to make a difference, it is imperative to understand the historical context of the present conflict.

Perhaps the greatest historical controversy fueling the current conflict is whether or not the Rohingya are native to Burma. Buddhist nationalists who do not recognize Rohingya as citizens of Myanmar argue that the Rohingya are not from Burma, and thus do not “belong” there. The very word “Rohingya” is considered taboo in Burma; the government only refers to the Rohingya as “Bengali illegal immigrants”, and refuses to list “Rohingya” as an ethnic group in national censuses.

In reality, the Rohingya, or at least the ancestors of the Rohingya, have inhabited modern-day Rakhine State of Myanmar since as early as the 8th century, when Muslim traders arrived from the Middle East. When Burman King Bodawpaya colonized the area in 1784, many Rohingya fled to modern-day Bangladesh, which many Buddhist nationalists consider the true native land of the Rohingya.

During the British occupation of modern-day Burma from 1824 to 1948, the British encouraged immigration from Bangladesh to support infrastructure projects, leading to a spike in the Rohingya population. As a result, after the British left Burma, the Rohingya were accused of taking advantage of the British period of colonization by taking jobs away from the Burmese population and were heavily oppressed by the rest of the population. When Japan invaded and occupied Burma from 1942-1945, the British intervened again, expelling Japanese forces and laying the groundwork for the formation of an independent Burmese state. During this period, many in the Rohingya community wished to gain autonomy by securing their own country in the Rakhine State, which they were originally promised by the British. When the British ultimately failed to fulfill their promise, a number of resentful Rohingya formed a rebel group called the Mujahid, who in the 1950s violently resisted and demanded annexation to Pakistan. The Mujahid controlled Rakhine State during this period, looting local villages until the early 1960s, when the Burmese government deployed major military operations against them. Today, because of the legacy of the Mujahid, the Rohingya are still widely associated with acts of terrorism in Burma.

Despite this history of tension and conflict, the Rohingya were still accepted as citizens as recently as the 1960s. It was after the coup d’état of General Ne Win that xenophobic sentiment became rampant, supporting the now-popular narrative that the Rohingya are illegal aliens who take jobs and threaten political stability. The start of Ne Win’s government in 1962 led to reports of violence against Rohingya began to arise. Although there are no concrete statistics on the precise number of Rohingya casualties to date, humanitarian groups have estimated that by the end of 2016, 21,900 Rohingya had fled to countries such as Bangladesh to escape persecution. In the early 1980s, Rohingya were officially declared “non-national” illegal immigrants on the grounds that the Rohingya population had only come to Burma during the British rule.

Burma, with its history of political instability and military coups, has a strong sense of nationalism. This sense of patriotism, combined with the widespread narrative that the Rohingya are violent immigrants, has made it difficult for Burmese State Counsellor Aung San Suu Kyi to publicly support citizenship for the Rohingya as well as measures to decrease violence in the Rakhine State. She has been widely criticized for her silence on the issue.

The persecution of the Rohingya will not stop on its own, but there is much that can be done to improve the situation. Since the current national narrative demonizing the group relies heavily on disputable historical claims, increased awareness of Rohingya history may convince more people within and outside of Burma to support the Rohingya’s right to citizenship. The international community can also play a major role in bringing peace to Burma. Increased involvement of foreign investigators and human rights watchdog groups can help estimate and publicize the true numbers of Rohingya casualties, which are often downplayed or denied by the Burmese government. Finally, STAND, together with The Nexus Fund, is fundraising for #RiseforRohingya, which supports a peacebuilding center in Burma that trains youth in Rakhine State in Burma to identify hate speech, and to develop projects to promote peace tolerance in their communities.

By raising awareness about the Rohingya’s suffering, and by donating to peacebuilding efforts in Burma, everyone can  play a role in promoting the compassionate understanding that is integral to lasting peace and universal human well-being.

Caroline Huh is entering her sophomore year at Smith College in Northampton, Massachusetts. She has written for the Sophian, the official newspaper of Smith College, acted as president of her high school’s LGBT club, organized fundraisers, and has a passion for East Asian and Gender studies.