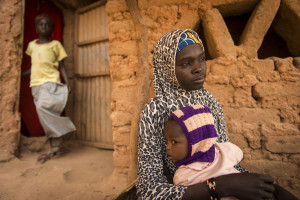 Although I have never had a child of my own, I have watched someone I love lose their child. The cavern of pain created by that death often seems insurmountable. Compound that with the stress of of living in an unstable environment threatened by malnutrition, rape, and violence and you start to have a picture of what life is like for mothers in Northeast Nigeria today.

The Northeast region of Nigeria is devastated by famine and food insecurity. The famine in Nigeria is the first man-made famine in the world in over a decade. UNICEF has stated that 75,000 children will die the next year in Borno State, a state roughly the size of West Virginia, if the humanitarian crisis is not urgently addressed. Recent reports show that roughly 4 million people are experiencing food crisis and 2.5 million children have severe cases of malnutrition and are struggling to survive.

While the Northeast has suffered from chronic underdevelopment, these alarming levels of suffering are in large part due to violence caused by Boko Haram, the same group which kidnapped the 276 Nigerian Chibok school girls two summers ago and committed the largest number of atrocities against civilians of any “terrorist” group in the world in 2015. The Nigerian government and humanitarian community have not been able to access civilians living in the areas that Boko Haram controlled for much of the last two years. As the international community regains access to the region, they are finding a humanitarian catastrophe of epic proportions.

As it stands, families do not have the resources to respond to this crisis. As a humanitarian projects manager Michael Mu’azu for Mercy Corps told The Huffington Post, “The carnage becomes more glaring as we gain access to newer areas, and it has become a struggle for those of us in the forefront to comprehend how to help the thousands we come across who need our support.” Families have spent years living in a threatening environment and now must find the strength to face a new kind of threat which attacks the most basic connection between a mother and a child. Field workers are reporting that mothers are now too malnourished to produce breast milk for their own children.

Visibility on this crisis, now, is vital. Lest we repeat: this is a famine, the first man-made, preventable famine in the world in over a decade. Unfortunately, media and politicians alike are preoccupied with a wide range of complex issues, but that is no excuse to let the famine in Nigeria go unchecked. We must use our combined voice to advocate on behalf of the needs of Nigerian families. We must make it perfectly clear that we as Americans, as parents, as siblings, and most importantly as humans will not tolerate this sort of tragedy. We will not patiently wait as hundreds of thousands of families bury their children. We will not wait for a generation of Nigerians to die.  Our collective morality will not allow for it. Instead we will raise our voice to our communities and our elected officials and we will demand greater funding and political attention for Nigeria. We will demand a concise, efficient, and effective humanitarian response before this crisis escalates even further.

The death of a child is inherently wrong. It is an experience that cannot truly be imagined until someone has lived through it. Many parents, regardless of where they live in this world, feel as though they are put on this earth to protect their child and to ensure their child has everything they need. Parents often equate the loss of a child with a direct failure on their part to act as a guardian. We cannot allow the mothers and fathers of Nigeria to carry this emotional weight alone. Instead, we will listen to their stories and as an international community of caretakers we will walk with them, we will support them, and we will address this crisis.

Take action now: sign this petition to Congress to ensure there’s enough humanitarian assistance to Nigeria to stop this tragedy and continue to raise your voice to #FightTheFamine.

Want to take further action? Call your Senators and Representatives, and mobilize your family and friends to do the same. Now is the moment to make a difference, let’s not pass it by. Corie Walsh recently graduated from University of North Carolina, with a degree in Peace, War, and Defense. She does research on issues mass atrocities, civilian protection, and identity-driven conflict. Notably, Corie co-founded a micro-finance program for Ugandan women; started the first collegiate chapter of the UN Shot@Life Campaign; and has engaged in initiatives such as AIESEC, RESULTS, Roosevelt Institute, Conference on World Affairs, and Beyond Conflict. She can be reached at coriewalsh@gmail.com.