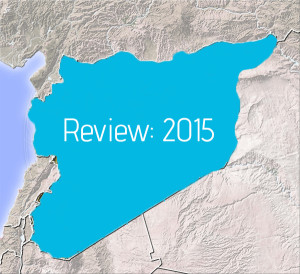 Many of STAND’s conflict zones have been witness to progress towards peace; the first democratic elections in Burma were held in November, a ceasefire was declared between the South Sudanese government and opposition groups, and most recently, a UN Security Council Resolution called for a nationwide ceasefire in Syria. Several conflict zones have also seen more concerning developments; Russian airstrikes against Syria claimed the lives of hundreds of civilians, summary executions became a regular occurrence in Burundi, and attacks against Muslims mounted in the Central African Republic. As STAND enters another year of genocide prevention and continues to cover developments in our five conflict areas, we have compiled the landmark events of 2015 in each of our conflict zones.

This week, STAND’s Middle East and North Africa Conflict Coordinator, Maddie King, has prepared a rundown of the key events of 2015 related to the Syrian conflict.

Maddie King serves as STAND’s Middle East and North Africa Conflict Coordinator, and is a junior at Johns Hopkins University, where she is pursuing majors in International Studies and Global Environmental Change and Sustainability and a minor in Islamic Studies. She is passionate about addressing issues of refugee resettlement, particularly as they relate to the roots of displacement.