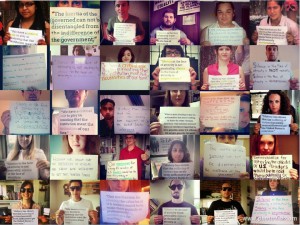 This post was written by Jake Ramirez, STAND’s Communication Coordinator. Jake is a rising junior at the University of Arizona.

Genocides and humanitarian wrongs are not the kinds of problems we grew up learning about on television. The problems we watched unfold were neat. Difficult? Sure. Violent? Sometimes. Scary? On occasion, but they were always resolved in a convenient 30-minute window. The bad guy was always unmasked, the resolution clearly defined, and the next episode of Scooby-Doo started. Neat. Unfortunately, the word “neat” is used very rarely in discussion about humanitarian issues, and always after the phrase, “this issue is not”.

When issues are complex, and we’re talking downright labyrinthian in many humanitarian cases, good people try to help the people that do understand. Most often, that means donating hard-earned dollars to organizations. We have a “bad” habit of throwing money at problems – we, America as a collective. I put bad in quotations because it isn’t a real problem; generosity is a fantastic trait, and money is a vital tool in the mending of almost any issue. It’s only a bad habit when we think we’ve seen the resolution and move on to the next episode.

How do you change a culture? You can start by simply acting. Don’t get me wrong, diving into some of these issues seems about as attractive as diving into a Nickelback greatest hits album, especially if you have a test on something like vector calc the next day. But you don’t have to understand the difference between the APRD, UFDR, CPJP, FDPC, and FACA to get started. I sure didn’t. I’m still a million miles from being an expert, but I’m making progress.

Every organization like STAND thrives on the human resource, and you can help simply by being an enthusiastic and willing volunteer. If your first volunteer mission is passing out flyers on campus with a partner, you’re making a friend! When you make a friend, you go back! When you go back you accidentally learn a little and then you accidentally learn a lot and all of a sudden you care deeply about the issues you once knew nothing about. All of a sudden, you’re providing something a lot more valuable than a twenty dollar check. Maybe you’re an informed, passionate person with a vested interest in the conflict in the Central African Republic, or an individual that wants to join the Peace Corps, and you’re someone that makes people around you want to do what you’re doing.

So how do you change a culture? Honestly, you probably don’t, at least not in the “Woodstock ‘69” sense. All you can do is act for yourself and hope your domino tips someone else’s. It doesn’t hurt to nudge a domino here or there though. Offer your roommate lunch if they go to a charity festival with you; I can think of maybe three people I’ve met in my collegiate existence that wouldn’t take me up on a free lunch, and people that don’t like free lunch aren’t people you should be associating with anyways.

We don’t live in a utopia, and until someone makes Adam Sandler stop making Grown Ups sequels, we never will. Still, the fact something can’t be perfected is not an excuse to abandon trying to make it better. If that were the case you would still be using t9 texting, and the Cavaliers would have signed Pau Gasol instead of Lebron.

Before my soapbox implodes:

Anyways, I’d love to hear any comments or questions you have, and if you like Grown Ups or Nickelback, I apologize. Email me at jramirez@standnow.org.