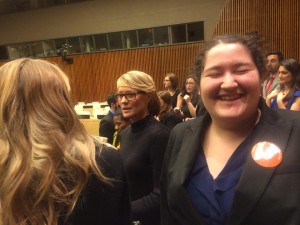 Or something like that. That’s how I was introduced to STAND, some 6, going on 7 years ago. I was a new student wandering around a chaotic club fair, when someone with a hastily made STAND sign started talking to me. I had never heard of Darfur, and I sure as heck hadn’t heard of the Democratic Republic of the Congo.

The rest, as they say, is history.

Since that time, STAND has become a second family to me in a variety of ways. From my high school chapter, which defined my experience in high school as well as the person I became, to serving on the national Managing Committee, where I’ve met some of the most incredible people I’ve ever known, STAND has consistently provided me with an environment of curiosity, compassion, and friendship.

As I wrap up my term as National Student Director, I couldn’t be more excited to be passing on the reins to one of the most capable, insightful, and hilarious people I know, Natasha Kieval. She’s also probably better at coming up with apt adjectives than I am. Natasha has a wealth of experience in the atrocity prevention world as an integral part of Tufts Against Genocide, is a former STAND intern, and has spent extensive time abroad.  STAND has never been the kind of organization where you know what the next day will bring. One thing’s for sure, though: the #STANDFam will be in extremely capable hands with Natasha.

To all of the members of STAND who have made this experience so memorable, I just want to say thank you. The chapter leaders, the members of the student leadership team, the people who have just been introduced to STAND at their very own club fairs, and anyone else who in some way identifies with STAND helps make us who we are. And for all of your efforts this year (and beyond!) toward reducing genocide and mass atrocities, thank you thank you thank you.