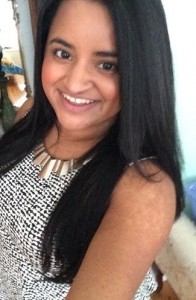 Fast Facts: Colleen Fonseca is one of STAND’s Emerging Conflict Analysts. Currently she is a junior at St. John’s University, studying Government and Politics. She is also involved with SJU STAND and is currently serving as her chapter’s President.

Why did you first get involved in STAND and how have you been involved since then?

I first became involved with STAND because I had seen a really cool flyer on my campus freshman year, and was looking for ways to get involved on campus. I knew that genocide and mass atrocities were happening around the world, but didn’t really know why. Since that first meeting I became Secretary and then President of my chapter at St. John’s. Also this past year I was selected to be an Emerging Conflict Analyst for STAND national.

By far my favorite STAND memory was in my second year with STAND, when the chapter President had established a partnership between our members and the International Rescue Committee. On one of my days at the IRC I was working with a newcomer from Iraq who grew flustered and annoyed with me having him practice in English. He challenged me to write my name in Arabic, so I did it and he laughed at how absolutely horrible it looked. From then on, in addition to his homework I was expected to practice my Arabic until it became somewhat legible. It was a great STAND memory because too often working on these issues in the States we feel detached, and don’t get the immediate satisfaction of seeing the benefits of our work. This was a unique opportunity to be one on one with someone who had endured the same issues I was interested in and reading about, but just as a normal 9 year old boy laughing at my abysmal Arabic skills.

What has your experience being on a Task Force been like?

Way better than I expected! I feel more articulate when I’m talking about issues, and have had a great opportunity to check out what some other people are up to and researching about. Never in a million years would I have ever expected that I would be interested in another region beyond the DRC, but I was able to really immerse myself in other conflicts and the intricacies of them in each individual country.

Can you tell us a little about what you do in your role as an Emerging Conflict Analyst?

Essentially what I do is keep up to date on conflicts that are “emerging,” and that can take a lot of different terms since each conflict and country/region is different. Each week I provide an update of what’s been happening in the international community that has the potential to result in a conflict. This update can happen via a blog post, storify, video, or a series of relevant tweets. Tapping into different forms of social media and news outlets I’m able to summarize the week in a neat little package for members to read up on.

What’s one thing you’ve learned from your time in STAND, whether as a result of your experiences with your chapter, or being involved on the national level?

With STAND National, I’ve especially learned the importance of individuals in this realm of work. With conflict and mass atrocities typically we see people as numbers. For example, according to Reuters currently 140,000 Syrians have been killed as a result of the uprising-turned- civil war. When we see that 140k we automatically think, “Wow that is a lot of people.” It’s once you really see the value of each person individually that you really witness just how truly devastating these conflicts are. Instead of just 140k people being murdered as a result of conflict, we know that Zayir who drives around his neighborhood dropping off kids at school was murdered and now those kids won’t go to school anymore. It’s really when we see those who endure these volatile times as individuals, that we get “the bigger picture.”

Interested in joining one of our Task Forces next year? Apply today!

One thought on “Get to know our Emerging Conflict Analyst!”