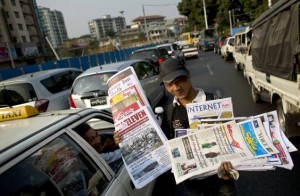 This piece was written by our Alex Colley Hart, STAND’s Burma Education Specialist.  Alex is a junior at Indiana University with a major in Internatinal Relations and a minor in Business.  You can reach him at acolleyhart@standnow.org.  The views here do not necessarily represent the views of STAND.

Burma, also known as Myanmar, has seemingly transformed from an isolated military dictatorship to a country engaged with its region and the international community. However, not all has gone as peacefully as some had hoped for the fledgling “democracy”.

Violence against Muslims in the predominantly Buddhist country has continuously flared up since mid-2012 with watchdog organizations like Human Rights Watch labeling the fighting as “a campaign of ethnic cleansing.” Originally targeting the Muslim ethnic group known as the Rohingya in western Burma, these acts of violence are commonly perpetrated by the radical Buddhist Rakhine and have since evolved into broader anti-Muslim sentiment, even spreading beyond Burma’s west into central parts of the country just last year.

The situation remains as tense as ever with the recent massacre of at least forty Rohingya at the end of January. This most recent violence began on January 9th when eight Rohingya men were attacked and killed by a group of local Rakhine. A police sergeant was then kidnapped and killed in retaliation four days later by a group of Rohingya. That evening local Rakhine police and civilians, according a United Nations report, killed forty Rohingya men, women, and children and injured many more.

Reporters for The Associated Press were the first to write about the massacre. However, The New Light of Myanmar, the state sanctioned newspaper, claimed the A.P. “falsely” reported on the violence and even “seemed to instigate” the fighting. The Myanmar Ministry of Information has also said the A.P. has been issued a warning about its reporting.

Despite its progress and a constitution guaranteeing freedom of expression and of the press, this massacre highlights the fact that Burma remains one of the least free countries in the world, particularly when it comes to reporting. Four journalists are currently on trial and are facing a possible fourteen years in prison. In December of last year, a journalist was imprisoned for three months due to her reporting. Even more alarmingly, an arrest warrant has been issued to Rohingya MP Shwe Maung for speaking up about police complicity in the recent violence against the Rohingya. Although official censorship has declined, an air of uncertainty leave many too fearful to write or speak ill of the government.

Access to accurate information is vital to a democratic and peaceful society. It can effectively combat the many racist and anti-religious sentiments held against the Rohingya and Muslims in general. However, without allowing politicians to speak out against crimes and journalists to do their jobs free from fear of government interference, Burma will not be able to resolve its conflicts peacefully and call itself a true democracy.