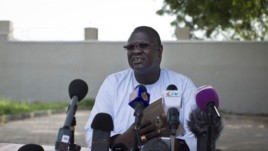 This post is written by our Sudan and South Sudan Coordinator, Baylen Campbell. If you would like another point of view, check out this piece. The opinions expressed here do not necessarily reflect those of STAND.

On December 14, political discord came about in the South Sudanese capital of Juba as a struggle for leadership between as a struggle for leadership between the supporters of Riek Machar, former Vice President, and Salva Kiir, clashed. Kiir claims that the actions of Riek and the SPLA factions was a coup attempt to obtain power, conversely Machar’s side states that the actions that took place were aimed to garner more political discourse. Violence broke out that evening. Since then over 250,000 people have been displaced, thousands killed, and much of the NGO and aid community working within the country fled. This conflict as well as the political turmoil in this period have been strongly based on ethnic lines, Machar being Nuer and Kiir being Dinka.

The two tribes which both leaders and their supports are made up of are the two largest ethnic groups within the country. The hostilities occurring in South Sudan over the past seven weeks are deeply rooted in the effects of tribalism in state politics. As is normal in much of sub-Saharan politics, tribalism and the relationship between local rule and state sovereignty have led to the further deterioration of the fragile stability within South Sudan.

Since gaining its independence, Southern Sudanese have struggled to establish a concrete national identity. This is because tribal rule is an inherent cultural facet within the country as well as in a majority of sub-Saharan Africa. The second reason for this is the instability within the region since the end of colonial rule; tribal rule has remained a stable source of governance when the state apparatus has failed to provide security. This has been the norm within much of post-colonial sub-Saharan Africa and a struggle that many countries face today, a road which South Sudan is just beginning to travel.

In the past decades a clear correlation between conflict and ethnicity has formed within the country as political parties and rebel groups have formed along tribal lines. Tribal tensions within the country have resulted in many disputes; on a more local level this has taken the form of cattle raids. Leading up to the happenings of the past weeks were targeted killings with victims being chosen based on their ethnicity. In Jonglei state, home to the largest population of Nuer, there has been near constant confrontation between Nuer and Dinka groups as well as state officials on both sides. This has led to mass corruption and the displacement of large portions of residents within Jonglei.

The effects of tribalism within the country have established a construed perception of each ethnic group on how to view state affairs, resulting in what seems to be a persistent blame game. In short, to bring about a stable peace, leaders within South Sudan must find some sort of common ground in moving past the long lasting ethnic divides. Without doing so, the country will continue to function in its current delicate existence. Acknowledging that the establishment of a concrete national identity is no easy task, taking the initial steps in doing so is within the ability of leaders such as Kiir and Machar.

The signing of a ceasefire between the two factions signed on January 23 was a positive sign of improvement and hope for the country. However, this positive development has not fully come to fruition as reports show that both leaders do not have full control over their forces. This again only shows how deep ethnic divisions exist within South Sudan and only exemplifies what a long journey South Sudanese citizens must travel before becoming a unified people.