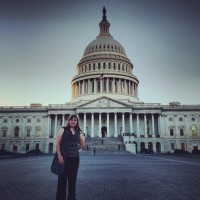 This past weekend, many fellow STAND students and activists came together for the national Women and Genocide Symposium co-sponsored by STAND and the Darfur Women Action Group. Though the conference was all the way in Washington DC, there were no limits to the distance the attendees traveled to get there – from New York to Colorado, there was a very diverse group of students present for the weekend. In addition, there were a broad range of interests and opinions that made the conference fun and engaging for everyone.

To begin the conference, a panel of scholars and officials spoke broadly on the topic of genocide, each with a different and informative perspective. Representing Sudan, Syria, the Congo, and the United Nations, the panelists spoke about why students and adults alike should care about care about these conflicts while also proposing viable, strategic plans of action. This was followed by several other informative speakers and powerful movie clips that clearly evoked empathy from the audience.

By the end of day one, everyone was exhausted yet invigorated. Debriefing discussions ensued once the day had come to a close and everyone seemed more knowledgeable about the situation in Sudan and the concept of genocide as a whole.

Day two opened with a panel of some of the most amazing and dedicated activists – students. Representing STAND was Mac Hamilton (former Education Coordinator) and Nate Wright (one of the founders of STAND at Georgetown University). Not only was their panel extremely engaging, it also showcased the value of student activism and the importance of the student voice within the anti-genocide movement. It showed students that their voice truly does matter and make a difference. Nate even emphasized the importance of “edgy” and unique campaigns in order to make the cause visible. This panel definitely left every student in the room feeling refreshed and excited to continue their work as part of the anti-genocide constituency.

As people said goodbye, it was evident that friendships had been established and important connections were made. The conference as a whole served as a great way to bring together people from all different communities to engage in one common goal – learning about and fighting against genocide.

After the conference, there was an optional lobby day on Monday. A few of us lobbied at the State Department, speaking with the Special Envoy to Sudan (well, his representative), and also Representatives of various states on Capitol Hill, hoping to obtain signatures on the Sudan Peace, Security, and Accountability Act – an act that would increase humanitarian aid to Sudan and put more international pressure on a comprehensive peace process. One of the Represenatives who was met with that day has already agreed to co-sponsor the bill!

Overall, the lobby day went very well, and even if the bill is not successfully passed, the STAND constituency, and anti-genocide constituency as a whole, will keep moving forward and pushing for a resolution to the conflicts in Sudan and everywhere that genocide exists.

If there was one thing students took away from this conference it was that every little action counts toward making a difference. My friend Shannon, a junior at the University of Colorado Boulder, was astounded at the knowledge she gained throughout the weekend. “I didn’t realize that the effects of sexual violence on a woman in Sudan are so detrimental – it’s shocking to think that one act of violence could destroy an entire culture,” she said.

Overall, this weekend served as a valuable resource for all involved, and was truly taken to heart by the participants. STAND students continue to show their commitment and dedication to the anti-genocide movement by attending events like this one- which is why, in time, perhaps a world without genocide will become a reality.