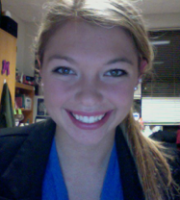 This summer we are placing a spotlight on some extrordinary STAND students. Our first amazing student is Rachael Grueber. Read on to learn about what she has done with STAND at John Carroll University in her own words. Keep an eye out for more spotlights on STAND students to come!

When I was a freshman at John Carroll University, I was first introduced to the Universal Declaration of Human Rights. All freshmen are required to take a First Year Seminar (FYS), and with human rights being something I felt strongly about, I decided to sign up for Human Rights and Social Justice with Dr. Clark. After hearing student after student complain about their FYS class, I honestly did not go into it with high expectations. However, this class not only strengthened my beliefs that I felt so passionately about, but it taught me how to debate and fight for them. Dr. Clark introduced me to a harsh reality that I had no idea still existed in our world today: genocide. Like most people, when I heard the word “genocide” I instantly thought about World War Two, Hitler, concentration camps, etc., a tragic event in history that would never happen again. Right? Sadly, I was wrong. How is it possible that such mass atrocities could be happening in the world today and so few people know about it? As the first Article of the Universal Declaration of Human Rights states, “All human beings are born free and equal in dignity and rights”. Then how is it possible that such atrocities and acts of genocide are occurring in Sudan, the Democratic Republic of Congo, Burma, and Syria? Why did I not know about this? More importantly, why isn’t anything being done about this?

As you can see, I had a lot of questions. Over the next few semesters at John Carroll, I continued to take Dr. Clark’s classes and grow stronger and stronger in my beliefs. At the end of my sophomore year, Dr. Clark told me about STAND. “Why don’t we have this at John Carroll?” Dr. Clark shrugged at me and said, “Why don’t you start it?” And so it began.

The summer after my sophomore year I was living in DC for an internship. Dr. Clark gave me a reference in the area that I met with who helped give me ideas about starting a chapter at my University. I came back to Carroll in the fall energetic and excited, ready to make STAND an official organization at John Carroll. The process was not as easy as I had thought. While balancing class, homework, cross country, and trying to maintain somewhat of a social life, I was emailing the Midwest STAND coordinator, Jack Spicer, other STAND chapter presidents, the president of my University, the CFCI regional coordinator, the Student Orgs rep on campus, and anyone who I thought could assist in making STAND possible at JCU. Despite the struggles we faced and through many, many hours of hard work, STAND was an official organization by the spring.

Then came the next challenge; how do we spread the word about our organization? We spent hours in the student center raising awareness about modern day genocide and getting signatures for a letter we sent to President Obama urging him to address the issue. Our big project, however, was One Million Bones. Originating from DC where the National Mall is covered with one million bones as a mass burial for victims of genocide, we simulated the same thing on our main quad at JCU. We lined the quad with signs offering facts about current day and past genocides in hopes of opening the eyes of students and faculty. The project was a great success and the first milestone for our chapter of STAND. I was so proud to see all of our hard work come together and the response of the campus to our One Million Bones presentation. I was reminded of a quote by Margaret Mead, “Never doubt that a small group of thoughtful, committed people can change the world. Indeed, it is the only thing that ever has.”

Our chapter is not even a year old yet and has a lot of work to do, but I am so excited to see what the future holds for our chapter. The past year has been a huge learning experience for me and I am so thankful. If it was not for John Carroll, I doubt that my human rights passion would ever be sparked into activism and a possible career path for my future. Going to a university with the mission of “building men and women for others” has certainly shaped the person I have become, and STAND has been a huge part of that journey. Our chapter could not have been possible without role models to look towards like Dr. Clark and a supportive student body that is so passionate and service oriented. I hope others have been as deeply moved by STAND and its mission as I have.