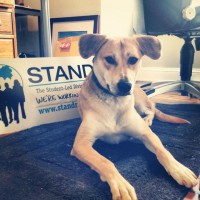 This post, written by Hannah Finnie, Student Director, tells about a day in the life of Waffle, Kat Fallon (Senior Manager)’s dog!

This morning I woke up around 5a.m, which is pretty typical for me.  My pet human, Kat, however, is pretty lazy and doesn’t usually get out of bed until 8am.  I always wondered why Kat was named Kat even though she’s not a cat.  Humans are funny animals, huh?

I’m a dog and I’m from Rwanda.  My name is Waffle because my fur is the perfect golden brown level that humans try to achieve when making waffles.  I personally prefer bones, but humans have different taste preferences I suppose.

Anyway, this morning I tried to wake Kat up so she could get to her job earlier than normal.  She has an important job: she fights genocide.  Once a week I go into the office with her and make sure she stays on top of her work.  She doesn’t usually listen to me though.  I’ve been thinking about taking her to human training classes lately.  If anyone has any suggestions, feel free to send them to me (waffle@standnow.org).

Like I was saying, I tried to wake her up early.  I went over to her bed and licked her face gently.  For some reason, she didn’t like that.  She tried to push me off the bed.  I always tell her to use her words, but she’s not as sophisticated as dogs I suppose.  I decided to start barking to show her that she needed to wake up. My bark is nicer than that Kanye West song she listens to in the morning to wake up, that’s for sure.  I was doing her a favor.

Finally, Kat and I were ready to go to work at STAND.  Whereas I just have to lick a few spots here and there to get ready, Kat goes through a very lengthy process to get ready in the morning.  It’s pretty ridiculous, actually.  Sometimes I try to speed the process up by licking her, but she never appreciates it and then spends even longer getting ready!  Humans, right?

As we were walking toward our office at Punch Rock, I saw a squirrel and tried to run after it.  For some reason Kat thinks that if she puts me on a leash she can control me.  I know how to get out of my leash, but I usually entertain Kat and let her think she’s in control.  I mean, sure I get distracted by squirrels and other dogs and cats that I see.  But Kat gets distracted by the smell of blueberry muffins and the sight of other dogs that are nowhere near as cute as me!  She has no self-restraint.

Finally, we got to the office.  I ran inside and looked around, sniffing people here and there to get a sense of the place again.  I come in around once a week, so everyone is always very excited to see me.  I said hi to Shomya, the STAND community manager, and saw that she was g-chatting Hannah while looking at pictures of North West.  Typical.  I also saw our interns, Haley and Natasha—they’re adogable!

For the next few hours, I maintained a watchful eye on Kat and Shomya as they responded to emails and participated in various meetings while plotting out STAND’s future. I’m pretty much STAND’s unofficial mascot.  Without me, Kat and Shomya wouldn’t get any work done.  I don’t know how STAND functions on days that I’m not in the office.

Around 3, I started getting tired, as it was time for my afternoon nap.  I dreamed of President Obama’s dog, Bo, and wondered if Samantha Power has a dog too.  I also dreamed of life back in Rwanda, where Kat found me.  We’ve been best friends ever since.

When I woke up it was already 4 o’clock!  Sure enough, Kat and Shomya were talking about Beyonce.  This is a pretty normal activity for them.  They also like to talk abut Daniel Solomon’s dance moves and Mickey Jackson’s pick-up lines.  I yawned to show them I was awake and that I expected them to go back to work.  After a few more quips about Beyonce and Blue Ivy, they finally got down to business.  Kat is busy transitioning in the new Managing Committee and Shomya is planning the MC retreat, which is coming up soon.

I wasn’t at last year’s MC retreat, but I think I need to go this summer.  STAND has a lot of work to do: we need to plan our fall semester campaigns, chart out long term strategies, and learn some best practices!  How will the new Managing Committee do that without me?  How would STAND function without me?  I am, after all, the Student Dogrector.