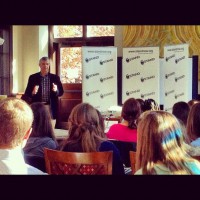 During the two days, students discussed contemporary issues affecting the atrocities prevention movement such as the role of diaspora groups, how to understand the Responsibility to Protect doctrine, how to avoid and improve “slacktivism,” and how students can develop nuanced advocacy.  In keeping with the theme of the conference, speakers discussed ways to transform the way we think about the history of human rights, the intersection of international politics and morality, and the ways in which we approach activism as students in the United States.

If you would like to get in touch with any of the speakers or organizers of the event or learn more about the content of the weekend, feel free to send an email toselangberg@gmail.com.