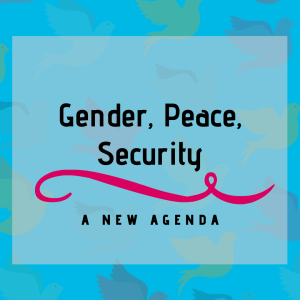 Have you ever thought about how peace actually comes about? If you’ve taken a history class, you’re probably familiar with the concept of peace treaties. The peace treaty, which is a legally binding document, is a tool of diplomacy that ends conflict between two or more parties, usually governments at war. These documents are incredibly important; they often set terms of surrender, in which parties may or may not agree to give up arms, acknowledge atrocities, cease certain attacks, settle debts incurred prior to or during the conflict, release prisoners, pay reparations, and possibly create structures that will inform the relationship going forward, such as an annexation of territory or alliance.

Peace is not simply a nebulous value. It is also a state of existence. It is an everyday experience for some, and a future experience to hope for, for many. When STAND and other organizations advocate for resolving conflict and creating peace, we are not simply advocating for the principle of peacefulness, but a change in the status quo for hundreds of millions of individuals around the world. One way that this is achieved is through peace treaties. These documents can have significant impacts on the resulting life for civilians. However, not all peace is created equal. The best peace treaties repair harm, reconcile atrocities, and provide a sustainable framework to continue a state of peace amongst all parties forever (or at least for the foreseeable future).

This is where the issue of gender becomes especially important. Conflict often disproportionately impacts women and girls in certain ways due to the use of sexual violence or kidnapping as a weapon of genocide or war. Certain peace treaties may provide better reparations for gender-based violence perpetrated during conflict than others, could potentially ignore the impact of war on women, fail to release women prisoners of war, or even fall apart without the assent of women.

Those “possibilities” are reality, and largely due to the lack of women involved in the treaty-writing process. According to UN Women, “between 1992 and 2018, women constituted 13% of negotiators, 3% of mediators and only 4% of signatories in major peace processes tracked by the Council on Foreign Relations.” This is unacceptable. Not only is it exclusionary and oppressive to women, it also does not set the foundation for sustainable peace. Research shows that peace treaties and agreements are more likely to create durable peace if women participate, and “peace agreements signed by women show a higher number of agreement provisions aimed at political reform and a higher implementation rate of these provisions” (UN Women).

So, how do we ensure that women’s voices are heard in peacemaking and peacebuilding processes? The United Nations’ original gender-aware peace policy, Resolution 1325, establishes a framework to measure, promote, and address the unique impacts of conflict and mass atrocities on women and to increase women’s participation in peace. This policy also helped create the Women, Peace, and Security agenda, which countries around the world, including the United States, have since formalized. This agenda has helped provide funding for women peacebuilders, codify the issues that women face in conflict settings, and train women on issues of peace and conflict resolution. Of course, there is more work to be done, beyond what the Women, Peace, and Security agenda has accomplished.

One important aspect we have to acknowledge is gender diversity; although the Women, Peace, and Security agenda has promoted women’s rights, it often utilizes narrowly defined terms of gender identity and expression. Unfortunately, the issues faced by gender non-conforming, non-binary, and transgender folks have been “largely absent from gender and peacebuilding research, policy and programming” and require further research (International Alert). Going forward, it is necessary to integrate gender-inclusive terminology in peacebuilding, not only to benefit folks of diverse gender identities, but to promote human rights and normalize these issues in international society.

The participatory aspect of peace negotiations is another important element to consider, especially the capacity for substantive participation from women and other gender identities. A major barrier to women’s participation in peace processes is that gender-diverse people all over the world face barriers to literacy, education, and job training that would help prepare them to formulate the documents and negotiate agreements for peace. It is not enough to simply add more women to the peace delegations and negotiating teams, but the international community must equip them with the tools necessary to make change. Increasing the proportion of gender-diverse individuals who are specifically trained as legal professionals, such as lawyers or paralegals, can help prepare societies to face peace processes with more gender diversity.

Finally, a key to promoting gender inclusivity and substantive participation in peace is the prevention and resolution of gender-based violence in conflict. It is vitally important that all human rights, peace, and foreign policy organizations continue to recognize the role that gender-based violence plays in conflict, and advocate to end impunity in cases of sexual violence, prosecute offenders, or create other non-legal transitional justice apparati to resolve the pain and trauma caused by this violence.

What can we do to help? The first step is to educate yourself. Visit the resources listed below to learn more about the role of gender in peacebuilding. The second step is to support and promote gender-diverse lawyers, encouraging women and gender-diverse folks to pursue law training in the context of peace. For the United States, this means passing policy to help fund programs that train women lawyers and paralegals all over the world–and domestically. It means holding perpetrators of sexual violence accountable and supporting survivors of sexual violence with resources and access to justice. Finally, it means creating a gender-diverse world by using individuals’ correct pronouns, advocating for diverse perspectives on gender, using more inclusive language, and creating institutions to support and protect gender identity.

Today is International Women’s Day! In honor of this international celebration, please enjoy this blog, and feel free to share it on social media.

Jordan Stevenson is a senior at Eastern Washington University, where she is majoring in International Affairs with a concentration in Global Public Policy, and minoring in Economics and Spanish. As an MC member, she co-leads STAND’s State Advocacy Lead program, communications operations, and policy process. Prior to joining STAND, Jordan served as a Global Youth Advocacy Fellow for Planned Parenthood, lobbied for women’s rights and U.S. foreign policy with Population Connection, and researched Indonesian political rights with the U.N. Development Programme. She currently works on campus at the Institute for Public Policy & Economic Analysis, is an LGBTQ Policy intern with GLIFAA, and does economic development work in Kenya with Partnering for Progress.