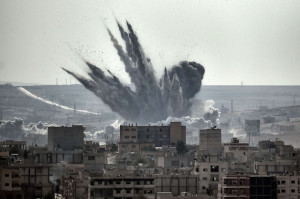 All too frequently, Syrian civilians are required to search for medical assistance for neurotoxic symptoms as a result of exposure to chemical weapons. On  January 22, 2018, civilians in eastern Douma, a suburb of Damascus, were attacked with chlorine gas. The Syrian government denies responsibility for the attack, despite the fact that the regime is known to use this type of attack and the area has been the target of constant bombings by the Assad regime over the last few months. Following the attack, the United States placed blame on Russia, a key ally of the Assad regime, for allowing the Assad regime to violate a multitude of international human rights laws. Although many nations are taking steps to address these abuses, such as by implementing sanctions or using diplomatic pressure to reduce the use of chemical weapons, the Assad regime continues to use them on civilians. This chemical attack, along with many others, illustrates that Russia has little concern for the lives lost or precedent set by continued employment of poisonous gases against the Syrian people. The abuse of human rights and the acceptance of said abuses, promoted by Russia’s negligence and Assad’s willingness to terrorize his own people, illustrate a dire need for further UN intervention to relieve the conflict and punish those who commit these horrid atrocities.

The first use of chemical warfare in the Syrian conflict was documented in March 2013, when a district in Aleppo was attacked by sarin nerve gas, yet no one was proven responsible.  Following that attack, the Assad regime deployed sarin gas in August of that year, killing more than 1,400 people. A U.S. assessment of the attack reported on the egregious symptoms of sarin attacks, such as “unconsciousness, foaming at the nose and mouth, rapid heartbeat, and difficulty breathing.”  Despite a U.S. attempt at intervention by President Obama’s announcement of chemical weapons use as a “red line,” a deal with Syria to turn over its chemical weapons to the Organization for the Prohibition of Chemical Weapons has failed miserably. Since chlorine is used for many industrial processes, it was not included in the deal, and has since been regularly used as a weapon in Syria. In fact, the Syrian American Medical Society, an organization providing healthcare in Syria, Lebanon, and Jordan to Syrians affected by the conflict, has recorded 194 chemical attacks across Syria since 2012, most involving chlorine-like substances, which displays a clear and persistent abuse of this material. Nine months ago, the Syrian government’s abuses were brought under even more scrutiny when they used sarin gas again in their assault on the northern town of Khan Sheikhoun. This attack caused a much stronger reaction from the international community. 83 civilians were killed, which led the Trump administration to launch an airstrike against the Syria airbase from which the bomber began its mission.

Many members of the international community blame Russia for the reoccurrence of chemical warfare in Syria due to Russia’s tendency to veto any action that would investigate or combat the use of such weapons. Most recently, Russia vetoed a resolution to create a Joint Investigative Mechanism in November. This initiative was designed to investigate and name those involved in the chemical attacks in Syria. When they vetoed this resolution, U.S. Ambassador to the UN Nikki Haley said that Russia “sent a dangerous message to the world” by deeming it acceptable to use chemical warfare against one’s own people. Additionally, since there is definitive reasoning that the Assad regime is guilty of human rights abuses, Russia’s efforts to stop international intervention could violate UN Security Council Resolution 2118, which constitutes that the use of chemical weapons anywhere represents a threat to international peace and security. The resolution specifically prohibits Syria from “using, developing, producing, otherwise acquiring, stockpiling or retaining chemical weapons, or transferring them to other States or non-State actors.” Syria must comply with the Organization for the Prohibition of Chemical Weapons (OPCW) and allow UN or OPCW representatives to have access to chemical weapons sites.

Launched on January 23, 2018, the international community formed the International Partnership Against Impunity for the Use of Chemical Weapons to take a definitive stance against Russia and Syria’s atrocities in the region. This 29-nation coalition includes France, Germany, the United Kingdom, and the United States, and is dedicated to preventing and punishing nations for chemical weapon use. Additionally, France has independently placed sanctions on businesses that were “supply networks for the Syrian Research and Study Centre (CERS),” which it describes as the “main laboratory in charge of chemical programmes” for the Syrian government.” France falls short of placing sanctions on individuals who are directly involved, however, citing possible political repercussions.

While the initial international responses to Russia and Syria’s actions are a good place to start, they are not nearly strong enough to have any substantial effect. This coalition needs to take bold, strong moves against Syria and Russia in order to ensure no more Syrian civilians fall victim to chemical weapons. The war in Syria has gone on for far too long, with far too many innocent people losing their lives at the hands of a regime willing to use weapons of mass-destruction against their own population. Check out the Syrian American Medical Society (SAMS)’s Save East Ghouta action page here for inspiration and to take action. It is time to take a STAND.