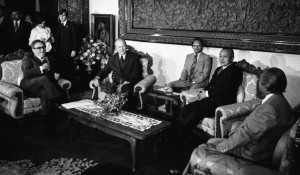 East Timor, or Timor-Leste, is a small nation on the island of Timor, sharing land with Pulau Timor, a portion of Indonesia. Timor is one of the larger islands in Southeast Asia, and the last major island of the Lesser Sunda Islands chain. The nation became independent from Indonesia and the 191st member of the United Nations in 2002. Yet, many people, especially Americans, are unaware of the nation’s existence and their history of oppression, persecution, and atrocities at the hands of Indonesia. This can be partially attributed to both the self-preservation of western nations and their business interests, and genocidaires’ continued possession of power in countries with a history of human rights abuses.

Portugal occupied East Timor from the 1600s to 1975. Months after Portugal left the island, Indonesia invaded, citing the fight against communism as a reason for invading the country. This justification was widely accepted because of concerns of the spread of communism

in Southeast Asia after the surrender of South Vietnam to communist North Vietnam in April of that same year.  As a result of the invasion, approximately 200,000 or more East Timor citizens – about one third of East Timor’s population at the time – perished from starvation, encircling and annihilation campaigns, and more. The initial invasion began on December 7, 1975 with naval bombardment of the East Timor’s capital, Dili, and then the use of troops through beach landing and paratroopers. Three days later, Indonesia  attacked Baucau, the second largest city. The direct conflict caused approximately 100,000 deaths. Though the United Nations condemned the significant human rights transgressions, the genocide took place without much attention from western media.

Before the invasion began, media platforms in the United States published a myriad of stories on Portugal’s departure from East Timor and concern over communism’s influence in the nation. The concerns of East Timor falling to communism are what prompted the invasion. Major newspapers like the Los Angeles Times, Chicago Tribune, and Washington Post failed to cover the issue once Indonesia got involved, which fed into the lack of knowledge on the human rights transgressions.

The conflict and occupation did not get much attention until November 12, 1981, when the Santa Cruz Massacre took place at a cemetery during the ceremony of a deceased independence leader, where at least 271 people died. Though this sparked media coverage, it covered the issue as if those fighting for independence were insurrectionists of a separatist movement, rather than as fighting for liberation against an oppressor.

This neglect and invasion was accepted because of Indonesia’s economic importance to the U.S. and the additional resources Indonesia could gain from occupying East Timor. This case provides another example of the indifference to genocide, especially when a nation sees it as beneficial to itself. While the United States was not actively killing mass quantities of people, they implicitly supported Indonesian invasion into East Timor and were contributing to rampant oppression through monetary assistance and weapon supply to Indonesia. During a meeting with Indonesian President Hajji Suharto the day before the invasion, U.S. President Gerald Ford stated, “We will understand and will not press you on the issue. We understand the problem you have and the intentions you have.” In this regard, the United States is guilty because of their failure to act, as well as their explicit support for the genocidal regime and invasion.

This failure shows that people must work to stay involved in the political process. American citizens must fight to ensure that they elect responsible officials that will not use tax dollars to fund genocide and other mass atrocities. Though this work is difficult, with a large amount of active and informed citizens backing it, we can ensure that our country works to combat genocide and advocate for civilians around the world.

Zachary Gossett is a member of the Communications Task Force for STAND. He is a first year student at Butler University in Indianapolis, Indiana, where he is studying political science. He is passionate about protecting the rights of people of the world.