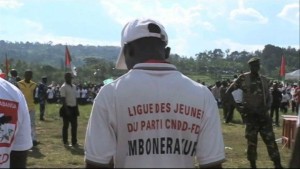 A twenty-two year old woman was beaten with sticks and raped in her own home. A seventeen year old watched her father be dragged away and murdered, before she herself was taken and raped. An eight year old girl was raped by four men while her mother was out of the house. These are only three of thirty-eight stories collected by Human Rights Watch, a global human rights research and advocacy organization, as part of a lengthy report on rape in Burundi. All of these women’s stories share one commonality outside of the sheer horror of the crime committed against them: they were all targeted by the Imbonerakure.

The Imbonerakure, meaning “those that see far” or “visionaries” in the local Kirundi language, is the name of the youth wing of the current ruling party in Burundi, an east African country that has of late been plagued with uncertainty and civil unrest after a long civil war that took place from 1993 to 2006. The Imbonerakure are supporters of President Pierre Nkurunziza, who took power in 2005. In 2015, Nkurunziza announced that he would run for a third term, violating the terms of Burundi’s constitution. His announcement provoked widespread opposition, which has been met with military action in an attempt to silence protesters. Amnesty International reports almost eighty civilians deemed “enemies” by the government were killed by police on December 11, 2015, and the conflict has only escalated since. The Imbonerakure serve as the zealous force behind this violence. They are given the power of police, and as one local protester claims, “Many of our policemen are only Imbonerakure, who wear policeman clothes.”

The violence incited by these men is a piece of the larger socio-political deterioration of Burundi that has resulted in a refugee crisis in East Africa. The current crisis is a symptom of unresolved tensions from atrocities in 1959, 1963, 1972, 1988, 1993 and 1994, food shortages that create class-related tensions, and the controversial third term of Nkurunziza, all of which the EU’s Civil Protection and Humanitarian Aid Operation cite as causes of the exodus of Burundi. According to the United Nations Office of the Human Rights High Commissioner, over 400,000 refugees have fled to countries such as Tanzania, Rwanda, and Uganda. Despite the mass number of refugees, the Burundi government denies that there is a crisis occurring, and, according to the BBC, calls allegations of rape and violence from the Imbonerakure “falsehoods.” For example, the government demands that Uganda “expel” Burundian refugees back to their home nation in what would be a direct violation of the UN Refugee Convention. The conflict and subsequent denial thereof can be correlated with ethnic conflict exacerbated by Belgian colonialism in the 20th century in Burundi; this conflict, facilitated in part by imperialists, also became a factor in the 1994 Rwandan Genocide. Regardless of government statements, there is an indisputable link between ethnicity and violent crimes against civilians, as multiple Burundi rape victims reported racial comments made during their attacks, including one whose assailants called her a “cockroach,” which HRW describes as “a term used to insult Tutsi during the 1994 Rwandan genocide.”

One member of the Imbonerakure agreed to speak with NPR, and discussed how the government in Burundi incites youth to violence. The man revealed how the ruling party provides military and police uniforms to youth members, presumably to provide a degree of anonymity and veneer of power, and encourages them to kill protesters and crush opposition. Most crimes against the Burundian people are blamed on the police because of the Imbonerakure’s facade. According to the interviewee, those who resist the injunction to kill, directed by government intelligence agents, fear that they themselves will be targeted for insubordination. Youth who comply to orders enjoy a rare sense of power that arises from being a part of the group—a lawless, fearless, and guiltless dominance arising from the feeling of control. By supporting the Imbonerakure, the government has created a force stronger than any law or president. The interviewee boasted, “Even the president of the republic… He’s there because we Imbonerakure, we are there.”

The power of the Imbonerakure reveals that youth-led movements are extraordinarily influential, and wield the potential to promote atrocities. Younger individuals have the power to change the mindset of a nation, and are thus often the focus of campaigns and propaganda, from the non-smoking advertisements of the current decade to Hitler Youth events organized for aspiring Nazis. Moreover, lacking commitments such as marriage, family, or career, teens and young adults often possess more fervor and dedication than adults when participating in political movements. More often than not, the activism of youth portends the future of a nation. As positive youth-led campaigns, such as the largely youth- and social media-organized Women’s March and March for Science in the U.S., gain prominence, it is important to remember that while youth can take on positive positions in society, under different conditions, such as those in Burundi, youth can also become leaders of a darker, potentially violent, future.

The United Nations has, at least in part, begun to take action against the crimes of the Imbonerakure. U.N. High Commissioner for Human Rights Zeid Ra’ad Al Hussein condemned the group in early April after they publicly advocated the rape of “enemy” women:

The grotesque rape chants by the young men of the Imbonerakure across several provinces in various parts of Burundi are deeply alarming – particularly because they confirm what we have been hearing from those who have fled Burundi about a campaign of fear and terror by this organized militia.

Additionally, TRAC, The Terrorism Research & Analysis Consortium has listed the Imbonerakure as a terrorist organization. Critics argue that in face of government endorsement of this group, the world should be doing more to aid civilian victims. HRW’s report argues that the UNHRC should do more to provide relief in refugee camps, especially for victims of rape. The camps often fail to identify victims of rape, and should work to create an environment where victims can identify themselves so they can receive proper physical and psychological care. Of the women interviewed, five had become pregnant from rape because the refugee camps had not been able to provide them with emergency care.

Due to the current lack of political will for intervention, as time goes on the likelihood increases that Burundi may ultimately face government-sponsored genocide or civil war, the impacts of which have been historically devastating in both Burundi and neighboring Rwanda. The slow rate of action among government officials to stop the tragedies in Burundi suggests that it is necessary for the youth-led movements advocating for genocide prevention and human rights to become a leading force in the fight against the atrocities occurring in Burundi.

Ugo Ndife is a recent graduate of Terre Haute South Vigo High School in Indiana, and will be attending the University of Pennsylvania in the fall. He began his work with STAND as a kid, following his brothers to chapter meetings, and has been involved with STAND ever since. Ugo has a passion for social justice of all kinds, among other things – namely drawing, listening to music, and afternoon napping.