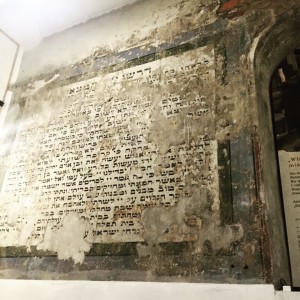 This summer, I had the opportunity to travel to Poland to learn about the Holocaust. During my trip, I went to different concentration and extermination camps, including Sobibor, a death camp constructed in 1942. As this was the third camp I had visited, I had already accustomed myself to the routine of visiting, learning, and leaving. I figured this would be a similar experience. I was not prepared for what I would see there. As we approached the death camp, I looked for stark buildings and barbed wire fences similar to those I had seen at Majdanek days before. Here, I saw nothing. In place of where the camp had been, I saw only a large grassy field, railroad tracks, and a pile of human ash. Somehow, this empty field was supposed to mark the place where more than 200,000 people had been killed. The absence of any trace of remembrance was stunning. I was unable to comprehend how this bare field had previously been used for something so horrific. When it was time to leave, I walked away from Sobibor entirely unsettled.

I realize physical reminders of the Holocaust will not always appear in our everyday lives. Yet my experience with the Sobibor death camp has made me fully appreciate  the vital importance of remembrance. The day of Yom HaShoah, which honors each of the 11 million innocent people that were murdered, ensures that we do not forget the magnitude of the largest genocide in history. Too often, the absence of physical representation leads to desensitization, which  leads the international community to downplay the enormity of the Holocaust and the lasting effect it has had on the world. Holocaust education is critical to ensure we not only remember, but also learn, from the past. The international community must recognize how the Holocaust could have been prevented and implement effective mechanisms to prevent history from repeating itself anywhere else in the world.

Today, in the United States, we have an opportunity to turn our remembrance into action. We can support a bill entitled the Elie Wiesel Genocide and Atrocities Prevention Act, which increases the United States’ capacity to prevent and proactively respond to genocide and mass atrocities around the world by coordinating a whole-government approach to atrocity prevention, authorizes funds for emerging atrocity situations, and trains Foreign Service Officers in atrocity prevention and response. Holocaust survivor and Nobel Laureate Elie Wiesel, for whom the legislation is named, passed away last year, but his words continue to inspire generations:

Silence encourages the tormentor, never the tormented. Sometimes we must interfere. When human lives are endangered, when human dignity is in jeopardy, national borders and sensitivities become irrelevant.

We must understand that in the face of mass atrocities we should welcome those who seek help, rather than closing our borders and turning them away. We should take steps to stop any form of senseless hatred and scapegoating, regardless of where it occurs, and foster compassion. Lastly, we should not need to rely on physical reminders be represent the tragedy of the Holocaust. The absence of the physical death camp in Sobibor should not diminish the potency of our memory of what occurred there. We must never forget the victims who had their lives stolen. Only then will we truly be able uphold the promise of “never forget” and “never again.” Ellen Bresnick is the Midwest Regional Organizer for STAND. She is currently a senior in high school in Middleton, WI, and the co-founder of En Masse, a multilingual publication platform for international issues. She looks forward to continuing her work with human rights next year in college at Washington University in St. Louis