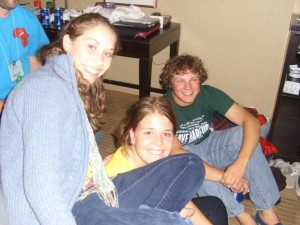 In honor of Kayla Mueller, a beautiful soul taken from us too soon. Our partner Students Organize for Syria is collecting donations in Kayla’s name for their medical drive to support the Syrian American Medical Society‘s heroic and lifesaving work in Syria. We are honored to support these efforts and to share this reflection by STAND alumna Christina MacKenzie about her friendship with Kayla.

A few months ago my company moved from our old office building to a brand new one. We spent the weeks before the move paring down the items at our desks until it was all ready to be packed and moved from one building to the other. That Friday I took a lot of things home, but the most important items were in my crate, ready to be unpacked the following Monday. I keep very few pictures on my desk – one of my closest family friends, one of my mom and me together, a picture of my dad who died in 2002…

…and a photo clipped from the Chicago Tribune over two years ago. A 1×2 inch picture of a smiling girl wearing a multicolored scarf around her neck. A photo that was in every US newspaper imaginable between February 6th and 10th, 2015. A photo of my friend, Kayla Mueller.

It’s hard for me to put into words how connected I felt to Kayla, especially since we knew each other mostly through phone calls, email, and gchat, with only a handful of in-person meetings spread over the course of a year. The simplest way to describe our relationship is this: She was a kindred spirit. We met in college when we were both outreach coordinators for a student-led anti-genocide organization called STAND, and she was the one who helped me realize that there are different levels of activism, and we weren’t on the same one!

There are those of us who lead fundraisers to send money and supplies to help. Those of us who call our representatives incessantly advocating for policy change. Those of us who work our part of the puzzle from the country we were born in so that we can build a better world by advocating for the kind of change that causes the evolution of thought between generations and brings us one step closer to the true equality of humanity.

And then there are those who know in their soul that their feet need to be on the ground helping NOW. Those who work from within warzones and failing states to manage the crisis at hand. Who take the donations and turn them into something tangible and practical to feed and care for people whose lives were turned upside down by the uncontrollable elements of chance and circumstance and birth place. I remember the day I met Kayla so clearly. We were all going around the room describing what brought us to STAND, and when she started describing the protests she’d led and participated in to gain awareness for the genocide in Darfur I was taken aback. She was smart. She was bold and fearless. She was committed, and she was relentlessly determined to bringing awareness to the suffering of others. And I could see she wanted to relieve their suffering too.

From that first weekend I met her during our senior years of college, I knew that Kayla was the kind of activist and humanitarian who would not stay Stateside for long. When she talked about humanitarian conflict and suffering I could hear in her voice and words that her heart was breaking for people half the world away who she’d never met, and that she felt her true power to help and alleviate their suffering would only be achieved by being there. That she would only feel she was truly helping when she could be in the same room with these people she’d never met, doing something to help.

And she did just that. In our last gchat before graduating she told me, “Well…first I’m going to India…then I’m not really sure maybe Zimbabwe or Palestine.” As a child of the world, she followed her heart, and she went to those places that called her to do what she could to heal suffering. To be a light to the world and all of the people in it. And she touched and cared for so many people.

Though our communication was sparse after she left for India, every time I thought about my friend or emailed her to see where she was and what she was up to, I knew she was somewhere doing good. And it still breaks my heart that the email I sent to her on April 7th, 2014 will never be answered…and that now I know why.

When I cut out and placed Kayla’s photo at my desk two years ago, I did so as a reminder to never forget to live life how Kayla lived. To work hard and to love selflessly and without abandon. To always put myself in the shoes every person I encounter. To be compassionate and kind, always. To give the benefit of the doubt. To learn and to use that knowledge to love and help people. When I look at her picture I don’t just see a picture of my friend. When I look at Kayla’s picture, I feel an overwhelming connection to the world as Kayla saw it – a world of people joined through the common experience of being alive and having a deeper purpose. We are all connected, we are all in this together, and we should all strive to foster and learn from our shared humanity.

In the days after Kayla was killed, I sent an email to some members of STAND with the following words:

‘I do not know what to say right now, other than I will miss her, and I hope I can embody even a fraction of the compassion and selflessness she possessed.’

This is still a hope I hold. That I can be as kind and selfless as my friend. Her photo at my desk is a daily reminder…just be good. Be kind and compassionate. Learn, and use that knowledge to love and help people. Those are the things Kayla would want.

To my friend: I still love you, I still miss you, and I am still striving to be like you.