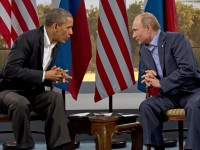 Last week I attended an event at the Atlantic Council in Washington, DC. The speakers at this event included Igor Ivanov, Former Foreign Minister of the Russian Federation, Lord George Robertson, Former Secretary General of NATO, and Frederic Hof, Senior Fellow of Rafik Hariri Center for the Middle East. This event detailed the current situation in Syria and whether a political solution is possible. I was amazed at the low number of questions directed toward Russia’s support of the Assad regime. The event focused primarily on current diplomatic issues and secondarily on how the humanitarian crisis is continuing unabated.

Multiple times during the event former Russian Foreign Minister (1999-2004) Igor Ivanov labeled the lack of trust between the United States and Russia as detrimental to current diplomatic proceedings. Indeed, he stated that this lack of trust and cooperation has severely limited the development of new mechanisms for tackling diplomatic problems and preventing mass atrocities. However, Ivanov’s comments about the situation reflect neither the complexity of the situation in Syria nor Russia’s reasons behind their recent diplomatic initiatives. Furthermore, Russian policies aiding and supplying weapons to the Assad regimedirectly support the use of conventional weapons that has killed more than 115,000 people since the conflict began.

Throughout the discussion at the Atlantic Council, Ivanov addressed neither the issue of violence against civilians nor Russia’s supplying of weapons to Assad’s regime. Ultimately, the lack of emphasis on civilian protection in Russia’s recent diplomatic proposals risks having a negative effect on efforts to lessen the violence in Syria, and ultimately might impede further progress into creating effective international early warning mechanisms for preventing mass atrocities.

Frederic C. Hof, a senior fellow at the Atlantic Council, and George Robertson, NATO Secretary General (1999-2004), criticized the explicit targeting of civilians by Assad’s government and Russia’s reluctance to put pressure on the Assad regime to stop it. To be fair, many other countries are neglecting the needs of Syrian civilians as well. Indeed, near the end of the discussion Robertson raised an important point about the faltering mass atrocities response initiative, the Responsibility to Protect doctrine. Robertson noted that overwhelming international “inaction (to halt the violence) in Syria undermines the Responsibility to Protect doctrine, and it would serve the international community well to revisit the lessons from Bosnia, where the United States, the European Union, and Russia collaborated to resolve a similarly horrific sectarian conflict.” The Responsibility to Protect Doctrine was first formulated during the 2005 UN World Summit and states that “sovereignty no longer exclusively protects States from foreign interference; it is a charge of responsibility that holds States accountable for the welfare of their people.” The three main pillars of this doctrine as developed since the 2005 UN World Summit are:

Ultimately, the third pillar’s emphasis on collective action through the Charter of the United Nations is dependent on the will and decisions of the Security Council. However, Russia holds veto power as one of the five permanent members of the council and has consistently opposed sanctions and actions explicitly targeting Assad’s regime. Indeed, Russia’s veto power has prolonged the inaction prevalent in the UN Security Council before the recent resolution to dispose of Syria’s chemical weapons.

Moreover, the recent call for immediate access to humanitarian aid in Syria by the UN Security Council still does not adequately address stopping the violence. Unfortunately, George Robertson’s concerns about inaction in the international community are valid and further raise important questions, such as:

Nevertheless, the international community will have to work together alongside Syrians on the ground to solve the situation in Syria. The planned Geneva II Middle East peace conference aims to  end the civil war and organize the peaceful transition of the country postwar. However, many feel that it is too little and too late. Furthermore, we can only hope that no member of the Security Council undermines prospects for peace by supporting a regime that systematically targets its own civilians.