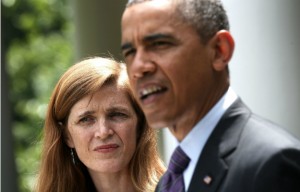 This article was written by John Norris and originally appeared at foreignpolicy.com.

With the confirmation hearings of Samantha Power to be the U.S. ambassador to the United Nations imminent, it is a good time to take a look at one of her signature projects from her tenure at the National Security Staff: the Atrocities Prevention Board.

A little more than a year ago, President Barack Obama announced the creation of the Atrocities Prevention Board during an address at the U.S. Holocaust Memorial Museum, saying that this initiative would make the deterrence of genocide and mass atrocities “a core national security interest and core moral responsibility.”

Both the president and Power seemed acutely aware of the challenges and risks of trying to develop an inter-agency atrocities prevention mechanism while the humanitarian tragedy continued to unfold in Syria — a conflict into which this administration has been reluctant to wade. Indeed, in many ways, the creation of the Atrocities Prevention Board, or APB, has felt a bit like trying to build a fire department in the middle of a three-alarm fire.

The roots of the APB come from a bipartisan belief that the United States, in places like Rwanda and Bosnia, simply did not do enough to counter genocides and mass atrocities as they gathered force. The 2008 report from the Genocide Prevention Task Force, co-chaired by former Secretary of State Madeleine Albright and former Secretary of Defense William Cohen, recommended the creation of a new high-level interagency body — what they called an Atrocities Prevention Committee — to improve U.S. government crisis-response systems and better equip Washington to mount coherent preventive responses.

As Obama’s special advisor for multilateral affairs, an outspoken champion for human rights and genocide prevention, and the author of a Pulitzer Prize winning book on the U.S. government and genocide, Power was a natural fit to breathe life into the Genocide Prevention Task Force’s concept while at the National Security Staff (NSS).

Power secured support for the APB through the August 2011 release of the Presidential Study Directive on Mass Atrocity Prevention, or PSD-10, of which she was the lead author. The directive called for the establishment of an interagency atrocities prevention mechanism, the APB, which would “coordinate a whole of government approach to preventing mass atrocities and genocide.”

However, when the formation of the APB was formally announced in 2012 by the president, a number of Republican critics used it as an opportunity to lacerate the president for inaction in Syria. Commentator Charles Krauthammer, at best an episodic voice on the importance of human rights, called the board an embarrassment, and bemoaned, “The liberal faith in the power of bureaucracy and flowcharts, of committees and reports, is legend. But this is parody.”

So what does the APB actually do? And what does the situation in Syria say about its work? The APB consists of high-ranking representatives, all originally hand-picked by Power, from 11 agencies, including State, Defense, Treasury, Justice, the CIA and others. The board has essentially split its functions between looking at long-term structural issues — such as sanctions regimes and how government personnel are trained — and a geographic focus on countries at risk of mass atrocities, usually over the medium term.

On a weekly basis, a sub-APB made up of working-level staff from the participating agencies meets to discuss the structural atrocity issues, with the State Department and USAID having the largest numbers of personnel involved. Once a month, the APB meets at the assistant-secretary level, with each agency’s representative reporting on important issues raised during the weekly discussions and following up regarding assigned activities. Quarterly, deputy principals gather for what has been termed a “deep-dive analysis,” with the assistance of an intelligence community briefing, designed to drive a substantial policy conversation regarding a country of potential concern. To date, some of the countries featured in these discussions have included Kenya, Burma, and Bangladesh. These conversations are designed to mobilize attention and resources within the respective agencies in an effort to avert atrocities in the countries under discussion, and to pre-position resources and analysis so that each agency can be better prepared.  One imagines that most ambassadors don’t particularly enjoy such a review, but such country-specific discussions certainly help sensitize diplomats to the risk factors associated with mass atrocities, and likely encourage more energetic efforts to avert such crisis.

Finally, the nine principals involved at the assistant secretary level also meet annually, and the APB presents an annual report on its activities and successes to the president in January of each year. Somewhat bafflingly, the APB has no signature public product, such as the State Department’s annualhuman rights report, and one of the most justified knocks on the board’s work to date has been the fact that it has been almost invisible from public view — a strategic decision within the administration that has one almost has to conclude has been driven by the situation in Syria. As a result of its lack of outreach, support for the APB remains very thin, particularly in Congress. As one congressional staffer told me, its activities to date are a “complete black hole.”

Perhaps the board’s most notable successes have come in getting agencies that have traditionally paid little attention to atrocity prevention, such as the departments of Treasury and Justice, to develop new tools to pursue major human rights abusers. Directly as a result of the APB’s work, the Department of Treasury has managed to place sanctions on suspected human rights abusers in the Democratic Republic of Congo, Zimbabwe, Iran, and Myanmar, and notably on 41 entities or individuals in Syria or with ties to the embattled Assad regime. The Department of Justice now has prosecutors working on human-rights abuse cases; a fraud team is assisting in seizing assets of human-rights abusers; and U.S. officials are helping train counterparts in other countries on how best to prosecute human rights cases. These are useful wins, as has been the improved coordination between agencies and improved training on these issues at State and USAID. Making the U.S. government better at atrocity prevention, by its very nature, includes some stuff that is not very sexy.

This brings us back to the elephant in the room: Syria. Since the uprising began in February 2011, the United Nations estimates that at least 80,000 Syrians have been killed, roughly 4 million are internally displaced, and at least 1.5 million have fled the country entirely. It is exactly the kind of carnage for which the APB was created to help prevent or diffuse.

Lanny Breuer, who represented the Justice Department on the APB until recently, argued that it was “unrealistic for a new entity that has no real authority to galvanize the government on Syria,” and added, “But what it can do is to raise awareness.” Breuer’s comments may be accurate, but if so, the administration surely oversold the APB’s potential when it was rolled out.

On background, those affiliated with the APB argue that it has functioned largely as it should during the crisis. They point out that the APB was created to push decisionmaking and policymaking on mass atrocities to the highest levels in government, and that the decisions on how to respond to the situation in Syria have been rigorously debated by the president and his core national security team. No board can force a president’s hand, and most agree that the policy choices in Syria run the gamut from bad to awful. Perhaps the APB is better positioned to deal with crises that are over the horizon or for which there are warning signs rather than ones that are directly unfolding. But, all that said, the APB was created with the express intent to prevent the next Rwanda or Bosnia, and Syria is looking an awful lot like one of those tragedies for which the phrase “never again” keeps getting repeated.

Much of Power’s career as an author and an activist was absolutely illuminated by her incandescent willingness to speak truth to power — which helps explain why the APB’s sotto voce approach has felt so dissatisfying with regard to Syria. The APB is doing good, important, and long-overdue work, but that legacy will surely be obscured if Syria continues to burn.