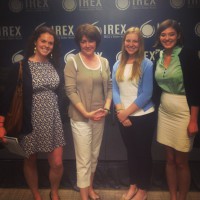 Yesterday morning we attended IREX and ICAN’s event More than Victims: Women’s Roles in the Syrian Conflict. The panelists, Sanam Naraghi Anderlini of the International Civil Society Action Network (ICAN), Caroline Ayoub of Souriali Radio, Rafif Jouejati of the Local Coordination Committees (LCC), and Sarah Taylor of the NGO Working Group on Women, Peace, and Security, spoke about the importance of adding women’s voices to the peacebuilding process. Women are often portrayed solely as victims of sexal gender-based violence, and their activism on the ground is often overlooked. While this violence against women is certainly important to recognize and discuss, portraying women solely as victims marginalizes and excludes them from pertinent conversation and decision-making. Ms. Anderlini pointed to the fact that women’s exclusion from the peace process is universal, not cultural, and spoke of the need for conversation on responsibility sharing, not power sharing.

Later in the afternoon, we attended the release of the 2013 Global Peace Index by the Center of Strategic and International Studies. Syria is ranked the third least peaceful nation in the world, and had the largest decrease in peace between 2012 and 2013. Since the beginning of the GPI in 2006, one of the major trends has been an increase in internal conflict as compared to the levels of inter-state conflict. Syria is a clear example of this trend and illustrates a lack of many of the “Pillars of Peace” that GPI has pinpointed as correlates to a peaceful nation. For example, countries with strong institutions tend to be more peaceful. Syria’s infrastructure is 80% destroyed due to the violence. This then becomes a classic chicken and egg question – do you stop the violence before rebuilding institutions? Or is there a way to achieve both simultaneously? The aftermath of destruction caused by violence is extremely expensive – in the year 2013 alone, violence containment cost the world $9.46 trillion, or $25 billion every day. This breaks down to $1300 per person, per year. However, the GPI also points out that there is no correlation between positive peace (the strength of attitudes, institutions, and structures) and Official Development Assistance (ODA). This harkens back to a point made earlier at the IREX event by Ms. Taylor about speaking directly with the people, especially the women, on the ground about what kind of intervention or assistance they would like to see in an area of conflict.

Michelle Breslauer of the GPI commented that we should be pursuing peace and its economic and social benefits instead of looking at it as a utopian ideal, which sparked much discussion at the STAND office.

If you are interested in learning more about IREX and ICAN, visit www.irex.org andwww.icanpeacenetwork.org. If you want to learn more about the Global Peace Index, visitwww.visionofhumanity.org.