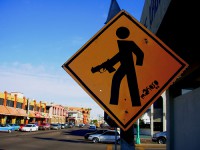 This post was written by Natasha Bell, from George Washington University STAND. For more about cartel violence in the context of mass atrocities, check out our blog post from September 2012.

An estimated 60,000 Mexicans that have lost their lives due to drug violence in the past 6 years.  Another 26,000 people have been reported missing and 140,000 have been displaced from their homes. The deaths, disappearances, and displacements are only the surface of the entrenched problems that plague our neighbor to the south.  The conflict in Mexico has corrupted the entire country.  It has seized control of the country out of the hands of the government and put it into the hands of criminals.  This inextinguishable conflict has come to dominate Mexico. The drug cartels are powerful enough to control the entire country of Mexico because they are the heads of a multi-billion dollar industry.  U.S. consumers funnel between 19 to 29 billion dollars into the hands of Mexican cartels to fill our demand for illicit drugs.  It is estimated that 95% of cocaine travels through Mexico into the United States and 40-67% of marijuana in the US comes from Mexico.  The U.S. demand for illegal drugs makes drug trafficking a profitable business in Mexico.  Consequently, it is U.S. dollars that fund the conflict. U.S. responsibility for this conflict does not end there.  The weapons that enact the violence also have strong American ties. Huge supplies of guns are arriving in Mexico both through legal and illegal means.  Mexico is now the largest recipient of weapons through “direct commercial sales.”  This is a U.S. government policy that sells weapons to the Mexican military.  Many of these weapons are being diverting into the hands of the cartels.  Additionally due to lax border control, guns purchased in the U.S. are easily smuggled into Mexico. Around 70-90% of the weapons confiscated from Mexico originate in the U.S.

Americans are filling the hands of cartel members with both money and weapons: all the necessary ingredients to perpetrate mass violence on innocent Mexican civilians.  There is no denying the close ties the U.S. has as both a funder and facilitator of the violence that is destroying the lives of an entire nation. Currently two of the hottest debates in the U.S. are about the legalization of marijuana and gun control.  But is the crucial connection to Mexico a loud voice in the dialogue? When we talk about legalization of drugs we talk about things like medical marijuana, the cost of incarcerating harmless drug users, and the potential tax revenue.  I want to know why we don’t talk about the fact that our black market demand for drugs feeds the violent drug wars in Mexico.  After the historic legalization of recreational use in Colorado and Washington in 2012, talk and support for legalization are at all time highs.  Let’s make Mexico a part of this conversation!  Let’s pump up marijuana users to promote peace while promoting drug legalization! Shouldn’t be a hard sell, right? Similarly, when we talk about gun control policy Mexico is not considered.  The media focuses on mental health and second amendment rights but very rarely does anyone point out how our gun policies are enabling the killing of thousands of innocent people in Mexico.  The horrors of isolated events like the Aurora or Newtown shootings shock and capture the attention of our nation and spark national debate about safety and regulation.  Unfortunately, violence is a pervasive reality of the everyday lives of Mexicans, and this too is enabled by American gun policy. We as Americans have a direct responsibility for what is going on in Mexico.  The drug wars in Mexico are an exported American conflict that would not exist without the U.S.  As a nation we are having policy debates right now that have the potential to greatly improve the future of Mexico.  Our ties and responsibility to this conflict are inescapable.  Fortunately, we have the power to limit the vitality of the conflict as well.  Let’s not let Mexico be forgotten.